Kenny, Nielsen’s Chief Executive and Chairman, spoke about the changing trends of audience measurement and the fast-paced media business 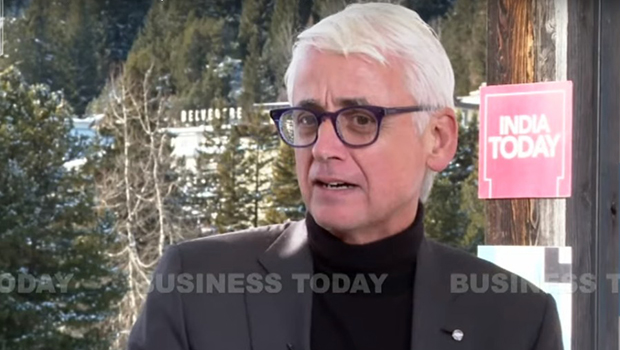 Speaking to Rahul Kanwal, Executive Director, Business Today and News Director, India Today and Aajtak, Nielsen's Chief Executive and Chairman, David Kenny, shared insights about the changing trends of audience measurement and the fast-paced media business, among other things, on the sidelines of World Economic Forum at Davos.

Kenny also highlighted how he is hoping to bring all these devices together and link them to the same individual.

"We have more data than ever before, televisions are connected to the internet. The phones are connected to the networks, and the set-top boxes from the cable companies can give us return path data. So, we have many data sources that can give us a starting point. There's still a lot of error in that data and still, a chance of double counting and reconciliation to the same person is hard. We also use an actual panel of people we know who agree to give us their data and we put the two together to get weight in a country like India which is very heterogeneous, weighted in each region, weighted by demographics, to get to a true view of what the audience is doing," Kenny said.

"The other advantage we have in measurement is that we don't allow anything to be used for targeting. We can use data without violating privacy because we only need enough data to reconcile. It is the same individual. We don't need to know the individual, we don’t track them in any permanent way. This is very unique for us too, especially in a privacy-centric world," he added.

Speaking about his plans for bringing this service to India, Kenny said, "We've been talking to many players in India - to the networks, to the advertisers and agencies. You have an organisation called BARC, which measures the linear side. We’ve already been measuring digital with Nielsen's digital ad ratings. We've been talking about how these things can all come together. Of course, there needs to be an agreement. Nielsen can't do it unilaterally but I think we're showing everyone a way to do this with integrity and transparency that builds the treasury in the market. We're getting some enthusiasm so it's certainly a big project for us this year to continue to focus on India and bring people together."

Upon being asked since OTT platforms have disrupted content in such a significant way in India, and to some extent abroad too, has it led to a crisis of confidence amongst content producers, including Bollywood film producers.

Kenny shared some important tips for content producers, he said, "We do a lot with content producers and with studios in Bollywood and Hollywood. I think that producers of content are going to have to understand the audience better than ever before."

"So, they're getting more insights because the audiences are more heterogeneous. You need to find your audience as opposed to just getting it on the linear schedule or in the theatre. Secondly, be discovered and so we have a second business within Nielsen called Grace Note which is to tag every movie and every episode of the TV series. We're spending a lot of time with studios on how you market in an OTT world to get discovered, to be rising up in the recommendation engine and to make sure once people have watched some of your episodes, they get recommendations for other episodes or other shows. This is different from the way films were marketed in the past."

Kanwal stated that there is a raging fight in America between OTT platforms like Amazon and measurement companies. But a lot of these platforms think they can do their own measurement, and they don't need somebody from the outside because all the data that's required is actually available in-house.

Reacting to this, Kenny said that everyone's data is only their own. So why do Netflix and YouTube use Nielsen? Because they need to know what people are watching when they are not watching them.

"This is what everyone is figuring out in 2023. We have a lot of growth in OTT. It doesn't go on forever. At the end of the day, there are only 7 billion people in the world and only 24 hours in a day. So, it is fixed and, therefore, you are competing for a share. When you're competing for share, the more you know about your share and someone else's share, is how you compete to gain the share," Kenny said.

Kanwal asked, "We had Sir Martin Sorrell. The point that he was making was that Artificial Intelligence will disrupt and make media planning companies redundant as they exist at this moment. What trends are you picking up and do you see a lot of technology disrupting the way in which the sectors function so far?"

To this, Kenny replied that he thinks the media planners and buyers are reinventing themselves. They are being more strategic and more thoughtful about the audience. As per him, AI only knows what an individual or a team teaches it, and so one still needs human creativity, and outside the box thinking.

"I think it's a very exciting time because I think some of the boring work can be handed over to the robot and the planners and buyers can do really interesting work," Kenny added.

Answering another question, Kenny spoke about how aligned is the marketplace for the idea that there must be one connected measurement linking back to an individual and not based on which device the content is being consumed on.

"So, I would say that from the buyers, from the advertisers and the agencies, they are very aligned globally with the world federation of advertisers. They are aligned with big global companies. This is important because ultimately, they are trying to reach people, for people, in the media sector. I think it was an intellectual agreement," Kenny said.

He then stated, "Of course, the business model can change because when you're measuring it together you're broadening the pie and I think people will want to work through this in a transparent way. I was really impressed by some of your government officials. Your Information and Broadcasting Ministry is really very thoughtful about this. The enormous advances in India in technology and the growth of mobile networks have made it even more important but I think we still need to work together on the details."

Upon being asked how he views the charges from a section of the society about ratings being meaningless, Kenny said, "I don't know enough to comment today. The problem you describe is solvable. This is what Nielsen does around the world because there are a lot of things you have to do about it, keeping panelists’ secret, not publishing information, there is a lot we need to do with cyber security."

He went on to add, “We have a lot of people who come to us from banks to understand all the compliance things you do in the financial system. We need a similar structure that is transparent and accountable and auditable in ratings.”

Commenting on if the way forward is integration, as many media operations are platform-based, Kenny said, "Yes but I think it's by form. It's a different engagement. Video and audio you can put together by time in engagement. The print has a different way of measuring so I don't think it's exactly one thing. It should be more interoperable, but for now we are focused on one video platform, one audio platform and one print and display."

Upon being asked what the big trends they are picking up in consumption, Kenny said that entertainment is increasingly being viewed on demand, which means people want control of their schedules.

“This means that sports and live news and live events are emerging as one place left to bring large populations together and those are still being watched. In the news, it matters if it is breaking and exciting.”

On the question of the manner in which companies are spending their dollars, and what Nielsen is looking at keenly this year, Kenny said, "There is a global recession, there's an energy problem and there's a war in Europe. This is causing people to be cautious and some are really just doing promotion and not so much brand-building.”

“I worry about this because the economy does have cycles of growth. India is really interesting because it's the fastest-growing country and has an enormous population. Global brands are focused on it and that creates more demand which is exciting. Thirdly, because so much of the content is streaming, people are really eager in the advertising world to be sure that we get to a single measure so that they can find the people in all of that noise."