Advertising has come a long way from being cerebral and consumer-centric to becoming more tactical and client-driven, say industry veterans

In the discussion on ‘Changing face of Advertising’ at the CII Big Picture Summit, industry players from Madison World, Counselage, Ogilvy and TAM Media research stated that in the early times advertising was about creating something magical, but today marketers have moved away from the ‘big idea’ to becoming a salesman 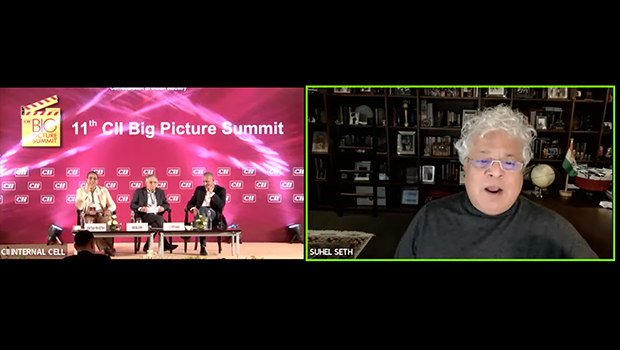 Speaking at the CII Big Picture Summit 2022, Sam Balsara, Chairman and MD, Madison World, highlighted that a lot has changed in advertising. In his views, in the past several decades, advertising summed up to a few thousand crores and was merely announcing product availability and making a manufacturer statement that ‘I am the best’ for probably decades.

“When I look back, I still find that my favourite definition of advertising continues to be the one that was given by Stephen Leacock, a humorist- ‘Advertising is the science of arresting the human intelligence long enough to get money from it’. Thus the fundamentals of what we attempt to achieve in advertising haven't changed too much, but the volumes have changed drastically,” said Madison’s Balsara.

Furthermore, he also went on to highlight that advertising is indeed the gas that fuels the entire economy or the machinery that keeps the wheels of the economy moving.

“Sadly, today advertising agencies are treated by clients like vendors and the relationship by and large has become unequal. There were times in advertising when both the parties sat together and co-created campaigns on the basis of deep consumer insight, rigorous approach to consumer behaviour learnings and insights that you could then glean and work in the narrative of the creativity that the agency excelled in and produced,” he added.

In the views of Seth, all that has changed now because agencies no longer get the kind of people that they used to get in the earlier days owing to insufficient pay.

Furthermore, he also went on to add that back in the day, when the clients asked the agencies to ‘jump’, the reply would be ‘why’, but today the reply has changed to ‘how high’.

Additionally, Seth also pointed out that in the earlier days, agencies had liberal arts people also staffing client offices. “I have no grouse against MBAs, but the MBA has been the worst disaster for advertising agencies because people have done management by ‘rote’ and have no idea of Shakespeare, Tagore or the sensitivities of music, they are asked to produce advertising which is bereft of sensitivity,” he stated.

In the views of Seth, the definition is very simple- The purpose of advertising is to invent desire and not to inform. “Earlier, advertising was all about creating magic and engaging the consumer with the brand through the medium of creativity,” he said.

One of the other changes that Seth has witnessed in advertising is the proliferation of media. “In the good old days, your clients would ask you about hoardings, television and cinema. But today the spread is huge and it is digital,” he ascertained.

However, the most dramatic changes that the advertising industry has undergone in the past decades, as per Counselage’s Seth, include spending increasingly less time on strategy and becoming more tactical, which isn’t pertinent to advertising but salesmanship because everyone is in a rush.

“Agencies don’t prepare for brands with the rigour like we used to. There were partnerships between, say Madison’s Media and creative agencies. But today, we often treat the media agencies as a post box or an amplifier and essentially as a means of disseminating the communication rather than partnering for the communication,” he added.

He also went on to add that agencies have stopped becoming inventive and innovative and have become more and more risk-averse because it caters to billions of dollars spent on advertising and no one wants to risk their numbers.

“People are wanting to manage not the consumer, but the client. When one starts managing the client, they immediately forget that consumer. It's very important then for the CEO and his wife to be happy, rather than the other way around,” Seth pointed out.

Furthermore, Seth also went on to add that today agencies are fraught with a lot of social tensions in society and ‘religion’ which was in the background earlier is now in the foreground.

“You have discrimination, political grandstanding, people on social media are bullying and trolling clients and companies to withdraw advertising - which is actually an attempt at conveying something creatively. So we are now living, to my mind, in very tense times and we have become a society of rage which makes creativity suffer,” he stated.

Summing it all up, Seth went on to assert that content is increasingly becoming more and more relevant because people have had to pay for it and they will give money only if they see merit and value.

“In the good old days, agency-client relationships lasted for years but today that relationship is almost like tendering quotations and that has to change. This change is only going to happen when agency leaders start to reign in clients and tell them that this is not the way advertising should, can and must happen,” he stated.

Moving on Rohitash Srivastava, Head of Strategic Planning, Ogilvy India, also stated that in an ideal scenario, advertising has become complete because earlier agencies were worried about changing people's thoughts and beliefs, thus the behaviour part was missing.

“You change a person's mindset and then you leave him to behave the way he wants to. Now with technology and digital coming in, the promise of technology was that we're going to change behaviour. So that was the ideal scenario and that's why I'm saying that today advertising in an ideal world is about not just think and feel, but extends to think, feel and do,” he stated.

Furthermore, Srivastava also went on to add that in reality, what has happened is that the industry has become more schizophrenic than ever and there is a lot of speed but there is no velocity or sense of direction.

“We are trying to do a lot but there is no bigger plan and this whole short-term-ism is really killing the industry. I've seen so many marketers behaving like salespeople. While marketing’s role is to create a facilitated environment so that the scalability of the product goes up not the sales itself, today's marketers are more worried about that very moment when the sale happens that they forget the larger task of marketing and advertising which is to create conditions of saleability over weeks, months and years and that is really what short term-ism in my views,” he said.

Additionally, Srivastava also went on to point out that information is being confused with knowledge. “There is so much of ‘dumb data’ around because one needs to look for the right meaning in the data and only then you can make sense of it and within that also there is data which is readily available and then there is long-term data and the whole desire to go through that data is blinding us of the human stories that are happening or what the people are really thinking and no matter what data comes in, we want to react to it,” he said.

“The discernment is going away and the whole idea of people rather being precisely wrong than roughly right, and this whole roughly right was such a big gift in the earlier days that we were paid so much because we could take decisions in grey areas and there was a creative courage to be roughly right. But the whole obsession, to be precise, is making us precisely wrong,” asserted Ogilvy’s Srivastava.

While commenting as to some of the changes that TAM Media Research has seen in the form of creative or content perspective, LV Krishnan, Chief Executive Officer, TAM Media Research, said, “Things have changed so much in the last five decades that we have seen advertising kick start in India and the interesting thing is that one thing that hasn't changed between the first year is that nobody has been able to answer the question as to which percentage of the 50% that I spend on advertising is a complete waste.”

He also went on to add that until the time the whole of the industry puts a finger on it, testing in terms of advertising will continue.

“But today, even if those two definitions are not thought through, execution is already happening on the ground to create communication effectively. In my view, as we are going more digital, the strategy is no longer there. In terms of influencer or social media marketing the promotion is not in alignment with the national campaign that the brand is running on television or on national print,” he added.

Madison’s Balsara also pointed out that today, almost 60% of ad spends are allocated to digital mediums and not traditional mediums like TV and Print, which has killed the ‘big idea’ that all agencies used to crave for and have made the big film budgets a thing of the past.

Striking a similar tone, Ogilvy’s Srivastava also stated that within digital mediums, the performance marketing part is really becoming significant to an extent that the role of the ‘big idea’ and its importance sometimes gets compromised.

Counselage’s Seth also emphasised that today brands and agencies want one particular campaign idea which they then try and force fit into several other media options, be it YouTube, Twitter, etc.

On a concluding note, he also went on to state that advertising over the years has transformed to become more tactical, rather than staying cerebral, and it has become more client-centric rather than consumer-centric.