In an exclusive interview with BestMedianfo.com, Anurag Kumar, CCO, Tata Play, said that they will be launching the Binge app directly on SmartTV interfaces by end of FY23 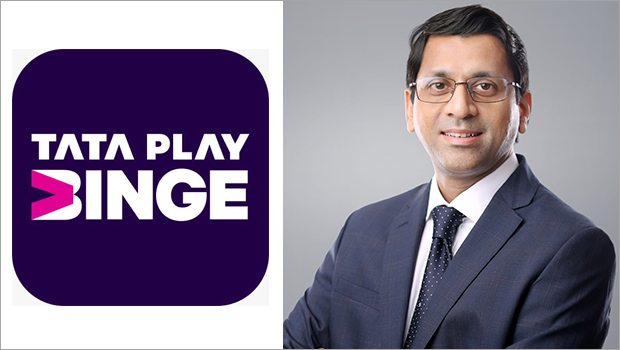 Recently, Tata Play made its OTT aggregation application, Tata Play Binge available to all smartphone users through a single-login interface, with plans starting at Rs 59 per month. Earlier it was only available to its DTH users.

In India, today approximately 70+ OTT services cater to 450 million+ consumers with just 90 million paid subscriptions. With this move, ​​Tata Play is betting big on Binge in order to control the digital arena and grow the market of paid OTT subscribers.

In an exclusive interview, Anurag Kumar, CCO, Tata Play, said, “Our journey outside our DTH base started only two weeks ago. There is a large number of people watching online videos, but not necessarily paying for them. With an aggregator like us coming into play, we’ll help grow the market of paid OTT. We’ll take care of some barriers which people have regarding paying for OTT. We’ll help grow the OTT market and benefit the entire ecosystem, including consumers, partner apps and obviously us.”

Kumar further said that the Tata Play Binge app will solve the problem of content discovery as they have created a unified single-user interface, where one can watch any content across different OTT apps through a single login. He explained, “As an OTT aggregator platform, instead of offering simple bundling of apps, by creating a unified interface, we have tried to resolve the problem of discovery. Once a user knows what he wants to watch, he can just go to the search icon and discover the content across apps in one place and not have to log in separately for each app.”

To create personalised experiences for consumers that reduce time spent navigating multiple platforms, options such as ‘Universal Search’, ‘Language Preference’ and ‘Create Your Own Binge List’, have been made prominent features on the app. Along with OTT content, the platform is also offering gaming options on the app.

The app would be available in a freemium model, wherein anyone can install the Binge app and view and browse free content across partner OTT apps, and can also watch premium content behind paywalls by choosing subscription plans starting from Rs 59 per month. A single subscription will allow simultaneous viewing on 2+ devices.

Garnering over one million paid subscribers in two years, Tata Play Binge was first made available on Amazon Fire TV Stick. It was later launched on Tata Play smart set-top box along with linear channels. Then it was introduced on a mobile app for only Tata Play DTH users. Most recently, it was made available to all smartphone users through an app.

Commenting on the evolution of Tata Sky to Tata Play and then launching Tata Play Binge, Kumar said, “When we undertook the shift from Tata Sky to Tata Play, we repositioned the brand from being known as a DTH operator to being known as a more holistic content distribution platform, straddling both TV and OTT. Over two years, we have tried to perfect the product. With the help of consumer feedback, we have improved the app. Today, we are confident enough to make it available to everyone worldwide.”

Currently, Tata Play Binge offers content from 17 OTT apps and will soon host 25 apps, as eight more apps are slated to get added in the coming months.

Netflix combo plans are available for Tata Play DTH subscribers, and Amazon Prime Video can be accessed with an add-on subscription on Binge.

Talking about the idea behind the campaign, Anurag Kumar, CCO at Tata Play, said, “While the consumers get some degree of awareness around which shows and movies they would want to watch, they don’t end up remembering the platform on which the content would be available. Through the campaign, we wanted to propagate that even every kid knows when it comes to finding any content, you can watch it on the Tata Play Binge app.”

The campaign is conceptualised and executed by Ogilvy India and the media planning and buying have been taken care of by Wavemaker. The campaign would be promoted in a sustained manner for a long period of time

Commenting on the social media strategy for the campaign, Kumar said, “Through the Tata Play Binge handle, we continue messaging around new content available on Binge. We also keep posting about us being an aggregator platform where one can watch content from different apps on a single platform. Our partner content platforms also keep on engaging with us on a regular basis through comments and posts.”

Kumar told BestMediaInfo.com that the campaign has already garnered over 1.5 million views and one lakh likes through two of their celebrities who shared the films on their social media handles. The platform’s partner apps too, regularly engage with them on social media through comments and posts.

Devising a strategy to overcome marketing challenges in the way

Kumar then went on to speak about challenges associated with marketing Tata Play’s DTH platform and Binge, given the different maturity levels of these two businesses. “We are the market leaders as DTH operators. The challenge is really about maintaining market leadership. Being relatively a mature category, it’s about devising strategies to deepen our market share and tapping into the new set of consumers by upgrading them from cable and Free Dish,” said Kumar.

When it comes to marketing Binge, Kumar said, “It is a new brand for the world outside. The challenge is to establish the brand and build awareness around what we do and acquire customers rapidly.”

While the new tariff order regime and dynamic evolution across the OTT space have made the market a bit challenging for OTT aggregators and DTH players to navigate, Kumar said that the primary objective of Tata Play will always be to keep serving the evolving needs of the consumers. “A few years ago when we defined our brand purpose with Tata Play, we decided to make tomorrow better than today for homes and families. While there is a lot of change and disruption, we continue innovating for our customers, making their tomorrow better than today. The launch of Binge is a big step in that direction. Through this, we are giving a better choice to our customers democratising the market in many ways.”

The growth of the OTT aggregation market

OTT aggregation is relatively a new proposition in the country. As of now, every player in this field is at an early stage. Currently, platforms like Tata Play, OTTplay, YuppTV Scope, ScreenHits TV and Airtel are in the game of OTT aggregation.

Recently, Dish TV’s Watcho expanded its offering by providing bundled packages of OTT platforms with the convenience of a single subscription.

Airtel Xtream has been banking on its own DTH and telcos base for growth.

Times Prime too offers 15+ OTT subscriptions under one roof.

Kumar said, “The OTT market will see a significant chunk of subscriptions coming through aggregation. The OTT aggregation market will grow rapidly because it addresses some of the key fundamental barriers to OTT adoption.”

While Tata Play is building Binge, it doesn’t mean the platform has shifted focus from DTH play. “Our journey of converting free-dish and cable operators to DTH will continue. Binge will grow on top of DTH. It won’t be a zero-sum game,” Kumar concluded.