20% of viewership for our Indian originals comes from outside of the country: Gaurav Gandhi of Prime Video

Theatre and streaming are symbiotic and not on opposite ends, said Gandhi, Vice-President, Prime Video, India at the CII Big Picture Summit 2022 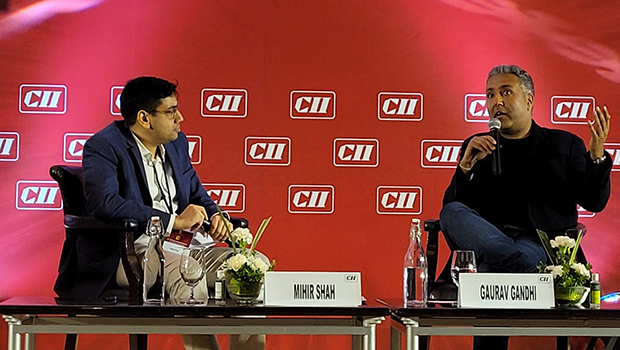 Participating in the fireside chat on “Streaming and its Impact on Media and Entertainment” at the CII Big Picture Summit 2022, Gaurav Gandhi, Vice-President, Prime Video, India, said, “Streaming is a core part of the industry and a big enabler for making more movies.”

Responding to a question from the conversation moderator, Mihir Shah, Vice-President, Media Partners Asia on streaming offering a new outlet to producers during the pandemic, to release their movies and if the trend placed theatres and streaming on the opposite ends of the spectrum, Gandhi said, “Theatre and streaming are symbiotic and not on the opposite ends. The theatre experience is unique and is here to stay. It's an experience that customers enjoy together on a very large screen. And there's no reason for one experience to replace the other. It's all additive.”

He added, “The film industry is about content creators who are making films and wanting access to customers. We are all means to that end and providing that access. So, if you're able to give much larger access to a customer base for a creator or talent, how does that become at odds with the objective of the filmmaker?”

Gandhi said, “Releasing movies direct to service (DTS) during the pandemic “opened people's eyes about what the reach of streaming and impact of streaming could be because we were releasing movies not just in one market but nationally and globally. This expanded the total addressable market rapidly and dramatically for creators and actors.”

Talking about the various models of streaming films, he added, “DTS is not the only model. A film can come straight to streaming, or we can license it. We could produce an original movie like we produced Maja Ma, or we could co-produce films, like we did with Ram Setu. As an industry, all streamers are investing forward in content with producers, and enabling them to create more films, and give them access and reach. All of this fuels the creative economy further.”

Responding to a question on streaming benefitting talent in front of and behind the camera, Gandhi said that there are three distinct advantages that streaming has for talent. “First is that, in the streaming world, we cast for characters, allowing for a very wide range of talent to become household names and stars, expanding the definition of what we call a star today,” he said. Adding further, he reiterated, “Because of the expansion of the total addressable market, for the first time, we are able to see the Indian film industry together, and not separately as Hindi, Tamil, Telugu, Malayalam, Kannada and so on. So, the market for talent really is pan-India and global. Thirdly, the kind of stories being told, which couldn’t have been told earlier, provides an even wider opportunity to everyone.”

Emphasising the role streaming can play to take Indian content to the global market, Gandhi said, “Releasing a movie simultaneously in 240+ countries and territories and getting global viewership is a massive opportunity. We don’t box ourselves to say that a story is made for a particular audience only. A good example would be a series we released recently, Suzhal – The Vortex. Originally in Tamil, we took it globally by releasing it in 30+ Indian and international languages. On average, 20% of viewership for our Indian originals comes from outside of the country. 50% of viewership of our Tamil, Telugu, Malayalam and Kannada cinema comes from outside the home states. This is a win-win for the entire industry and the customers. I can actually say, three to five years out we will genuinely be talked about the same way we talk about Korea and Turkey and so on, with respect to global hits.”

When asked about Prime Video’s video entertainment marketplace and if the Indian market was ready for new models, Gaurav said, “Whether the customers want to take a subscription service, or they want to add another channel (Prime Video Channels) or they want to watch a movie on rent (Movie Rentals), all of these are just expanding the pool of customers who can access premium content. While we are investing deeply in creating supply through licensing films, producing original movies, and co-productions, at the other end, we are also enabling distribution. It's democratic for the creators and customers, liberating them from being stuck to a particular model.”

Talking about the role of streaming in the overall M&E landscape post-pandemic, and the growth opportunities going forward, he reiterated the strong tailwinds supporting the industry, such as ubiquitous devices, affordable data, great content, younger population adopting streaming. He also spoke about the three key changes brought forth by the pandemic, “The first was temporary - people had more time on their hands. The second and third were permanent - streaming changed their viewing habits, and they had access to an expanded selection of content, across genres and formats leading to an expansion of the linguistic palette. These changes not only fueled the growth in streaming but also allied industries.”