Increasing attack of data and AI on media agencies can make them go out of business: Martin Sorrell

In an interview with Business Today at the World Economic Forum’s annual meeting in Davos, Switzerland, Sorrell - Executive Chairman, S4 Capital Group and Co-Founder, S4S Ventures, said that he is very bullish on India as ‘Brand India’ is becoming an increasingly greater force from both population and economic point of view 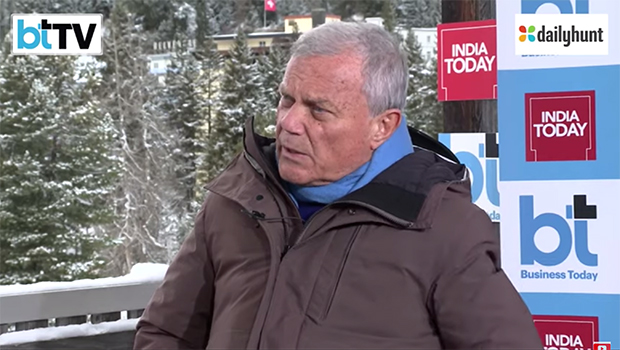 Unless the media agencies adapt to the technological advancements and changes, they could go out of business as the technology is already present and is just waiting to get more refined, said Martin Sorrell, Executive Chairman, S4 Capital Group and Co-Founder, S4S Ventures.

He explained further, “The massive problem for the holding companies - be it Omnicom Media Group, Publicis Groupe, IPG Mediabrands, WPP, Dentsu or Havas, is that almost half of the profitability of all the six holding companies depends on media planning and buying which is facing an increasing attack from the technological changes that are generally driven by data and AI.”

Sorell also mentioned that it was a misunderstanding that tech platforms were not competitors to the holding companies because they didn't want to go into a big service business. He stated that the tech platforms today are developing technologies that can plan and buy media directly with clients in a very effective way.

Sorrell said that he is very ‘bullish’ about India’s prospects in the years ahead and the primary reason for this is the vast pool of talent in the country.

Upon being questioned as to what are some of the key trends in the advertising and marketing landscape that he currently is watching out for, Sorrell replied, “Because the CEOs have already seen a heavy turnover this year, the issue is that there's a short-term focus. One of the trends that we're seeing is that there’s a focus on activation and performance. This year it’s going to be difficult for clients to get price increases as their margins are lowering, as one is moving down the funnel to activation and performance, so the emphasis on volume and revenue growth is critically important,” he said.

Additionally, Sorell also stated that the industry is likely to see a lot of acceleration of marketing transformation between three functions- Sales, Marketing and IT - as they have to come together to make the case for procurement and finance which in the world that we're living in at the moment has more power inside corporations.

Sharing his viewpoint on the outlook for traditional mediums, Sorrell said that he feels ‘pretty gloomy’ as the future for traditional media will continue to be under pressure. “The proportion of advertising in the GDP of the US which stood at around 2% when I started, shrunk to under 1% during Covid, and is now being forecasted to go back up to about 1.5% by 2025,” he said.

“It is going to come from the continued rise of visual which currently is about 65% in the US and will be 75% by 2025. Analog - whether it be Live To Air (LTA) or Free To Air (FTA), TV - classical newspapers, radio and outdoor are forecasted to be either flat or down,” he added.

Commenting on the future of television in the way that it exists and in the way that he sees it evolve, Sorrell said that clients generally get very frustrated because media agencies continue to run the same ad in each break which not only upsets the consumers but also clients - as their money often gets wasted on the capping.

“They look at the reach of young viewers of traditional media and that is declining which makes a lot of clients question as to why there is an inordinate spending of funds on classical TV or Analog TV which leads to fewer funds for the digital medium whose measurement might not be perfect by any means but it's probably easier to monitor and perfect the media mix modelling,” he said.

Sorrell also went on to add that it is becoming increasingly important to use technology in the most effective way to create change and be more efficient as everything is ultimately becoming digital.

In Sorrell’s view, Artificial Intelligence (AI) is one of the waves that's going to come in the advertising and marketing landscape but it'll take some time for the machines to learn more intricate and complex things.

Furthermore, he also went on to state that the distinction between AI and artificial general intelligence (AGI) is that while the former is more specific and mechanistic, AGI is about more highbrow and intent.

“But I think the impact would be more profound for media planning and buying which is the bedrock of the advertising landscape,” he added.

Sorrell stated that the biggest change that he sees in the modern contemporary world is that people running global businesses have to look at and be selective about the geographical areas that they focus on.

“I think the bifurcation between the US and China has had a remarkable impact on us as well. Being a mini global company with 9,000 people in 32 countries, we used to be in 33 countries before, we pulled out of Russia and it, therefore, has a very significant impact on how we see the world,” he added.

Commenting as to how bullish is he on India, Sorrell said that he is very bullish when it comes to India, primarily due to two reasons- One is PM Narendra Modi has made Brand India an increasingly greater force from both population and economic point of view, and secondly because India is the prime beneficiary of the raising security concerns around Taiwan and China’s policies which has led to a redistribution of the supply chain.

“I'm bullish about North and South America because I think that the time zone there is powerful. I think the same about the Middle East and Asia, with the caveat that people with big positions in China are nervous about going further, so markets such as India, Indonesia, Vietnam, Southeast Asia, Malaysia and the Philippines are all going to benefit from greater growth and supply chain diversions in it,” he said.

He added that in the Indian context, “There’s a huge capability of creativity, technology and outsourcing.”

Sharing his views on whether he sees the ‘de-globalisation’ as a temporary phenomenon or a new reality, Sorrell said, “I think the fundamental issue is the US-China relationship - as those are the two largest economies of the world and India will be the third largest, followed by Germany and Indonesia by 2050.”

Furthermore, Sorrell also went on to state that he doesn’t see things softening as long as there is no significant improvement in the US-China relationship.

“I think part of Xi’s legacy will be Taiwan and that raises the Taiwan security issue. On the US side, it's a bipartisan issue - wherein both Republicans and Democrats agree on one thing and that is the anti-China rhetoric,” he said.