Public voting started on February 18 and will continue till March 18, 2022 to determine the winners of country’s finest talent on the OTT platform 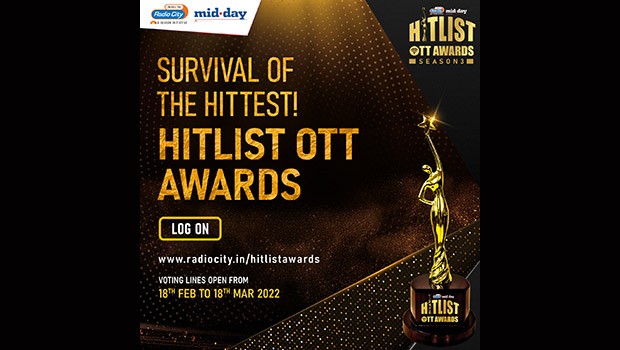 Radio City and Mid-day, the Mumbai-based tabloid, have announced the launch of the third edition of ‘Hitlist OTT Awards’.

Public voting for the OTT awards has commenced from February 18. The third season is underway to nominate and determine the most original and credible listeners’ choice award that recognises the best of India’s talent and content on the OTT platform.

India’s OTT creators have become an integral part of the entertainment space and established their own identity with original stories and brilliant portrayal of talented performances. ‘Hitlist OTT Awards’ were first launched in 2020 and received a great response from the audience in its first two seasons.

The month-long voting process for the public will close on March 18. The in-house jury including Mayank Shekhar, a film critic and Mid-day's entertainment editor, along with Radio City RJ Salil Acharya, an influencer, and several other well-known online critics will be empanelled as the judges.

The public can log in to the URL - https://www.radiocity.in/hitlistawards available on Radio City and Mid-day’s social media channels and cast their votes.

The award finale will be held on March 29, 2022 in Mumbai in the presence of the nominees and prominent personalities from the OTT entertainment world.

Ashit Kukian, Chief Executive Officer, Radio City, said, “It gives us great joy to witness the ongoing enthusiasm for the third season of the Hitlist OTT Awards. It's one of the most sought-after events as it recognises innovative content creators and talented artists who have been at the forefront of developing enriching entertainment for the OTT platform. The last two award seasons were successful in truly transforming the OTT awards landscape. These awards have gained popularity among audiences pan India and have consequently raised the bar for OTT players to produce quality content that resonates with the viewers’ expectations. As the OTT market is predicted to grow at 22-25% CAGR, recognitions such as the Hitlist OTT Awards will continue to build a legacy that celebrates the diligence of creators and artists to bring quality entertainment to the audiences. We are excited to witness the battle unfold to crown these creative and talented performances in the OTT space.”

Radio City and Mid-day have begun promotions of ‘Hitlist OTT Awards’ - Season 3 on their social media platforms along with cross-promotions from OTT actors on their respective social media handles.

Radio City RJs are generating excitement around the awards in the form of contests, interviews with celebrities, industry speaks, trivia time, and much more. These contests and interviews provide the listeners an opportunity to interact with their favourite OTT actors and stars.

Similarly, Mid-day also has begun to run daily campaigns to generate public awareness for the award nominations. The entire awards nomination list is being featured on the popular tabloid along with a designated Hitlist section that showcases the artist’s profile and interviews of the nominees.

These interviews cover the journey of the artists, their experiences, the evolution of the OTT platform, and its potential to capture the entertainment space. Promotions for the third season are being carried out across radio, print, digital, social media, and on-ground platforms.