The streaming service has also announced the launch of a six-part mini-series ‘Taking Guard: India’s Quest for Kiwi Glory’ 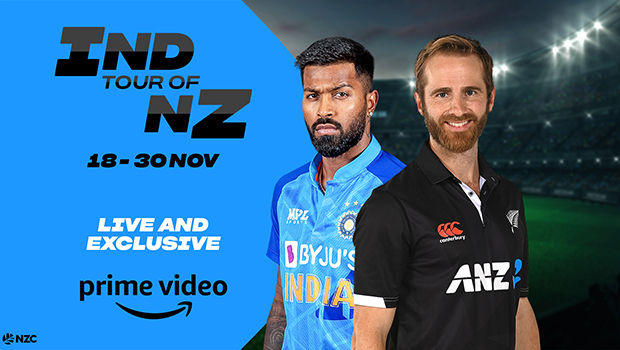 Prime Video is all geared up for live cricket with India men’s tour of New Zealand beginning November 18. The streaming service has also announced the launch of a six-part mini-series ‘Taking Guard: India’s Quest for Kiwi Glory’.

The limited over series will consist of three T20Is and equal number of ODIs and will be available to watch live and exclusively on Prime Video, the official rights holder to exclusively stream all men’s and women’s cricket matches played in New Zealand for the India market.

Fans excited to watch the bi-lateral series live on Prime Video will also get an additional ring side view into the storied rivalry between two giants of the short format game, as the streaming service announced the launch of the six-part mini-series.

Taking Guard explores India’s fabled rivalry with the Kiwis, going back to 1967, through archival match footage, soundbytes and graphics. The documentary moves seamlessly through varied themes chronicling India’s tour to New Zealand over the years.

Former greats of the game, who lend their voice in telling this riveting story include Ravi Shastri, Ajit Agarkar, Danny Morrison, Simon Doull and Ian Smith. Harsha Bhogle, who has not only witnessed this rivalry from close quarters but has been the voice narrating the highs and lows from some of these matches from the commentary box, also talks about his experience.

“At Prime Video we are committed to super-serving our customers in India, providing on-demand access to the best in entertainment across formats, genres and language,” said Chaitanya Divan, Head of Sports, Prime Video, India. “We are now excited to bring them the best in live sports and provide a new viewing experience of the much anticipated bi-lateral tour this November, between the two titans of the cricketing world – India and New Zealand.”

“Indians have a huge appetite for cricket and we are excited to present the new exclusive mini-series Taking Guard before India’s highly-anticipated tour to New Zealand in a few weeks. Featuring insights and analysis from cricketing legends, Taking Guard casts the spotlight on the rivalry between the two countries, which barely sees any baring of the teeth, snarling or heated moments on the field but is full of intense competition and peppered with mutual respect. We are excited and look forward to this contest between two terrific and evenly-matched sides and will announce a few more initiatives for cricket fans in the coming weeks as the action moves from Australia to New Zealand,” Divan added.

This mini-series is part of Prime Video’s special programming initiative around the upcoming series that starts on November 18 with the first T20I and concludes with the last ODI on November 30.

Team India recently announced the white ball squad for their tour of New Zealand. The series promises to be an exciting chapter in the next generation of Indian cricketers as they prepare themselves for the ICC Men’s Cricket World Cup next year. It will mark Hardik Pandya’s debut as a Team India captain of the T20I squad and will have Shikhar Dhawan lead in the fifty-over format.

In addition, in the fast bowling department, Mohammed Siraj and Deepak Chahar come in for the T20Is and ODIs respectively. The young Shubhman Gill who led the India A team against their Kiwi counterparts is expected to make his international debut for India in the shortest format of the game in this series.

New Zealand have had a terrific campaign in the shortest format of the game recently, and the last time India toured New Zealand in 2020, where they played two Tests, three ODIs, and five T20I matches. Whilst the T20I series was a clean sweep for India, New Zealand won the ODI series which was also their first clean sweep against India in an ODI series with three or more matches. Will the two evenly matched sides recreate that same magic of the previous tour this time around? Fans will have to wait and watch.

Fans on Prime Video can also access a host of cricket programming and highlights, and can also watch clips of key moments from the matches on the service shortly after each match end

To watch the matches, Prime members can go to the Prime Video app on their respective devices and will see matches shown in a carousel for Live Cricket or they can search for “New Zealand Cricket” in the search bar.

They can stream these matches online through their web browser, mobile devices, internet-connected TVs, set-top-boxes, Fire TV sticks and other compatible devices.