June happens to be the first-ever Marathi film to be launched on a TVOD basis. Fans can buy a ticket and watch the movie. Vistas Media Capital, a Singapore-based venture capitalist firm, has synergised with Planet Marathi OTT to enable the release 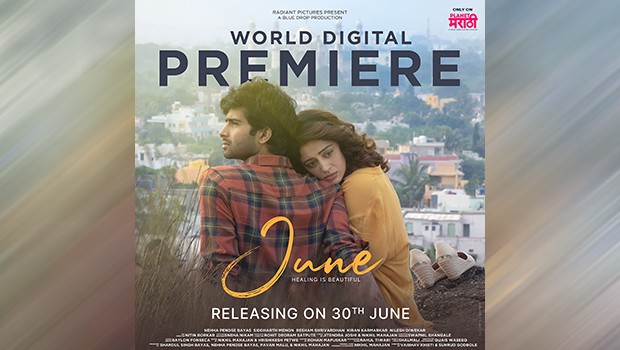 Planet Marathi OTT has been piquing the curiosity of Marathi fans ever since their launch with announcements of web series and web films in their kitty. The release of Planet Marathi OTT’s first Marathi cinema ‘June’ will mark the beginning of their journey. The release and launch of the platform is timed perfectly together on June 30.

June happens to be the first-ever Marathi film to be launched on a TVOD basis. Marathi movie fans can simply buy a ticket and watch the movie on Planet Marathi Cinema. Vistas Media Capital, a Singapore-based venture capitalists firm, has synergised with Planet Marathi OTT to enable this and many more such innovations to Marathi Digital Theatre.

June has been the talk of the town due to its star cast, namely Nehha Pendse Bayas, Siddharth Menon, Kiran Karmarkar, Resham Shrivardhan and Nilesh Diwekar.

Helmed by Suhrud Godbole and Vaibhav Khisti, June is penned by critically acclaimed director Nikhil Mahajan. It is also his debut as a producer. Shalmali Kholgade is the musical mastermind for the film, with Jitendra Joshi and Nikhil Mahajan penning the lyrics.

The film is the synergetic production of Supri Media’s Shardul Singh Bayas and Nehha Pendse Bayas in association with Nikhil Mahajan and Pavan Malu of Blue Drop Films Pvt. Ltd.

Akshay Bardapurkar, CMD Planet Marathi, said, “The story penned by Nikhil Mahajan and the direction by Vaibhav and Suhrud brings together a mature and gratifying film. Planet Marathi OTT the first and only exclusive Marathi OTT is proud to present this feature film to audiences through our platform. The film is close to my heart since it is filmed in Aurangabad, my birthplace and hometown. We, too, are excited to present this film that delves into the layers of our emotions. In times like now, movie-buffs seek the experience of theatre but are not able to go out. Planet Marathi OTT brings a theatre experience for Marathi film to their devices. Not everyone wants to subscribe for the whole month or a year. They can simply buy a ticket and view a movie multiple times over 48 hours!”

The leading lady and the co-producer of the film June, Nehha Pendse-Bayas said, “June is a path-breaking cinema but what makes this experience even more exhilarating was that I got to work with the best in the industry. Nikhil Mahajan has done a great job penning down raw emotions in this film and Suhrud and Vaibhav bring it to life. The film will certainly touch audiences because it is a bold yet sentimental take on the magical experience of healing. Planet Marathi truly gives justice to the film by giving it a global theatrical release but even better, digitally. We couldn’t have had a better platform.”

Betaal fame Siddharth Menon said, “June I feel is indeed a turning point for the entire team right from the directors to everybody. This film opened me up as a more nuanced artist. It is also a turning point of the way Marathi films can be experienced through Planet Marathi OTT’s global digital platform. It will be a relatable yet thought-provoking experience for the audience. We can't wait to see how the people respond to the film.”