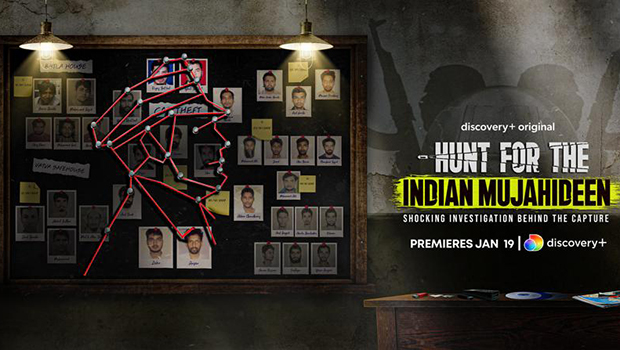 Warner Bros Discovery is all set to present to viewers its new original ‘Hunt for The Indian Mujahideen’ on discovery+ beginning January 19.

The serial blasts across various cities in India that took place during the early 2000’s were one of the most horrific terror strikes India has ever endured. The investigations conducted by the Mumbai police and the Indian Intelligence Bureau infiltrated the tactical operations of the masterminds behind the gruesome terror acts – the Indian Mujahideen group.

Showcasing the step-by-step journey of arresting the dangerous convicts who caused havoc across the nation, Warner Bros Discovery’s new original on discovery+, essays the first-person narrative of the investigating officers. As the story progresses, viewers will unravel the investigation, leading them to the story behind one of the most horrifying homegrown terrorist networks.

Sai Abishek, Head of Factual and Lifestyle Cluster, South Asia, Warner Bros Discovery, said, “Warner Bros. Discovery has always pioneered dynamic stories with dramatic value that resonate with audiences across the country. The Indian Mujahideen group left a devastating effect with its gruesome activities. This special highlights one of the greatest triumphs of the Indian security forces as they tactfully dismantle their functions in an enthralling saga that will leave viewers engrossed and on the edge of their seats. ‘Hunt For The Indian Mujahideen’, the upcoming original on discovery+, will keep viewers stunned as they witness the strategy and planning undertaken to capture one of the most notorious homegrown terrorist organisations. The storyline will captivate the audiences as the backstory surrounding true events unfolds upon them.”

Speaking of his experience helming the series, Zulfakar Sadriwala (Xulfee), director, Hunt For The Indian Mujahideen, said, “The most challenging yet enriching experience as a filmmaker was to set a seamless narrative of the investigation without making it too complicated for the viewers.”

​​​Deepak Dhar, Founder and CEO, Banijay Asia, said, “We at Banijay Asia are always experimenting with concepts and formats, and this is yet another investigative documentary for us. Audience demand for real life stories is continuing to grow and with Hunt for The Indian Mujahideen, we're fulfilling this need gap. We've collaborated with discovery+ for some of our key projects and it is always a pleasure partnering with them."