Produced by StudioNEXT, the second season of Shark Tank India will begin airing on January 2 at 10 pm on Sony Entertainment Television every Monday to Friday as well as will stream on Sony LIV 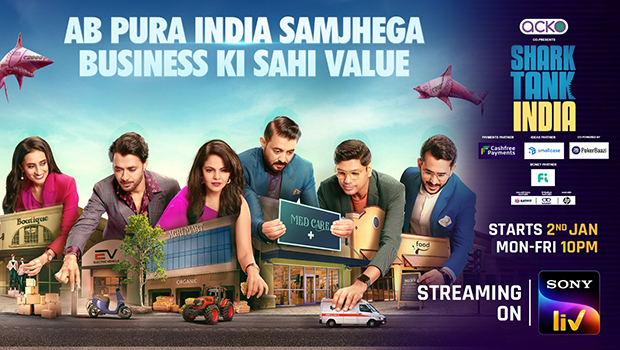 Launched in 2021, Shark Tank, the business reality show, anchored its position in the Indian market. Shark Tank India introduced an entirely new genre to audiences and within no time became top on popularity charts. Taking the franchise ahead, Sony Entertainment Television and Sony LIV are all set to bring in the second season of the show for the viewers.

Produced by StudioNEXT, the second season of Shark Tank India will begin airing on January 2 at 10 pm on Sony Entertainment Television every Monday to Friday as well as will stream on Sony LIV.

In a statement, the network said, “This season promises the viewers fresh and new business terminologies, and a boost to aspiring entrepreneurs with opportunities to follow their dreams. The show showcases a plethora of unique and never seen ideas as well as gives a glimpse into the booming start-up ecosystem of India. LetsVenture has come on board as Talent Sourcing Advisor for the show.”

Sony Pictures Networks India further said, “Shark Tank India season one received a phenomenal response from brands and advertisers, as well as influenced trends in conceptual advertising and marketing. With season 2, the show has already clocked in triple the revenue on Sony LIV as compared to last year.”

For the second season, Sony LIV has partnered with ACKO serving as the co-presenting partner. The show is co-powered by advertisers like Pokerbaazi. Dwelling into the special categories, they have onboarded Cashfree Payments as the “Payment Partner”, smallcase as “Ideas Partner”, and Fi Money as “Money Partner”. While other brands like EatFit and Lenskart have been roped in as well.

Furthermore, the show will be co-powered by CarDekho on Sony Entertainment Television. In addition, SET has also onboarded Cashfree Payments as the “Payments Partner” and Seqrite, Lenskart, Chaudhry Nummero and Apollo 24|7 as the associate sponsors.

This year, representing the start-up ecosystem in the country, are - Aman Gupta (Co-Founder and CMO of boAt), Amit Jain (CEO and Co-founder - CarDekho Group, InsuranceDekho.com), Anupam Mittal (Founder and CEO of Shaadi.com – People Group), Namita Thapar (Executive Director of Emcure Pharmaceuticals), Peyush Bansal (Founder & CEO of Lenskart.com) and Vineeta Singh (Co-Founder and CEO of SUGAR Cosmetics). While the Sharks anchor the show with their offers and deals, and in many ways pearls of wisdom as well, host and stand-up comedian Rahul Dua will act as a guide to the pitchers this season.

Vasanth Kamath, CEO & Founder, smallcase, said, “We are delighted to be the Ideas Partner on Shark Tank India's highly anticipated second season. Associating with a show that supports and celebrates innovation aligns with smallcase's mission of empowering Indians with simple investment ideas. The show has a diverse and savvy audience, and we aim to reach a large base of investors and contribute to the growth of entrepreneurial spirit and equity culture across the country.”

Sujith Narayanan, CEO, Fi Money, commented, “Over the last season of Shark Tank, we have seen how it's influenced Indian youth to look at money much more smartly. Now everyone is talking about growth, valuations, portfolios and so on. We are excited about the 2nd season, and to be part of this emerging conversation around wealth creation. And there is no better time than now, given this newfound awareness that our audiences have of money.”

Akash Sinha, CEO and Co-Founder, Cashfree Payments, shared, “We are excited to further our partnership with Shark Tank India for the second year in a row. The first season proved to be quite impactful, providing impetus to entrepreneurship and innovation. At Cashfree Payments, we value the entrepreneurial spirit and understand the importance of enabling the start-up ecosystem. India’s digital payments growth story is fuelled by a surge in the number of start-ups not just in metros but across tier 2 & 3 cities. These innovative businesses rely on cash-free payments’ safe and trusted payment stack to scale their business. We believe, this association goes a long way towards our philosophy of fostering innovation in the Indian start-up ecosystem, which deserves to be encouraged and celebrated.”

Charu Kishnani, EVP Marketing & Content, CarDekho Group, added, “We are elated to be associated with Shark Tank India 2.0. As a house of brands, CarDekho Group has been a proponent of entrepreneurship in India and strongly resonates with the focus Shark Tank brings on promoting ingenious business ideas. Shark Tank India season one took the country by storm. The show not only made entrepreneurship mainstream but also provided a platform for aspiring businessmen, especially from Tier 2 and Tier 3 cities to realize their dreams. The second season of the show will be even more impactful as an increased number of entrepreneurs will get a chance to showcase their ideas. Through association with the show, CarDekho will offer support to these upcoming professionals in helping fulfil their aspirations and make sustainable businesses.”