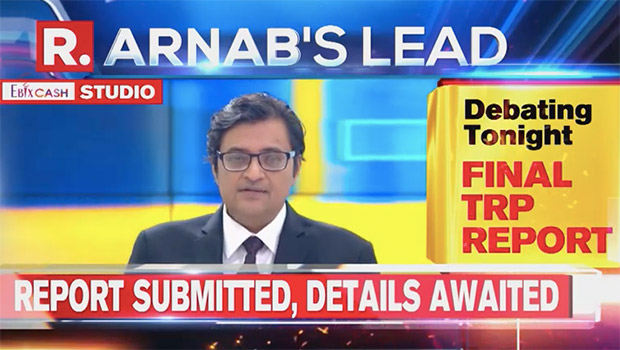 No evidence was found against Republic TV in the alleged TRP rigging scam, the Enforcement Directorate (ED) has claimed in its charge sheet filed before a special court here, PTI reported on Wednesday.

The Mumbai police's probe in this respect was "at variance” with its probe, the central agency said in the charge sheet.

At the same time, the ED also said that it found evidence that some regional and entertainment channels were involved in manipulating Television Rating Points (TRP) by paying sample or 'panel' households.

The ED filed an Enforcement Case Information Report (ECIR), which is equivalent to a police FIR, in November 2020.

The ED charge sheet said there was a wider conspiracy between channel viewers, agents and regional managers to influence/induce panel households to watch certain channels for monetary gains.

TRP is dependent on small statistical data of nearly 1800 households in Mumbai and 45000 households all over India, it noted.

It is very difficult to pinpoint when the manipulation started, but various channel owners manipulated the system for a considerable period of time, it said.

Channels such as Maha Movies, Box Cinema, Fakt Marathi and others entered into a criminal conspiracy with Bompalli Mistry, a former top executive of Hansa group in the garb of a cable reach survey, it said.

The panel households denied having taken money for watching Republic TV or Republic Bharat, it said.

No evidence of Republic TV or Republic Bharat indulging in these practises was forthcoming "either by the statement or by digital data evidence," it added.

The allegations by Mumbai police on the basis of the forensic audit report were “superficial” and based on the analysis of “limited aspects", the charge sheet said.

Mahesh Bompalli had complete knowledge of the manipulation of TRP in respect of channels like Box cinema and Fakt Marathi, said the ED.

Bompalli and owners of Box Cinema and Fakt Marathi, among others, have been named as accused in the charge sheet.