The dairy brand organised Cheesy Cook-Off with celebrity chef Ajay Chopra, which was an extension finale of the ‘Food Ka Buddy Campaign’ 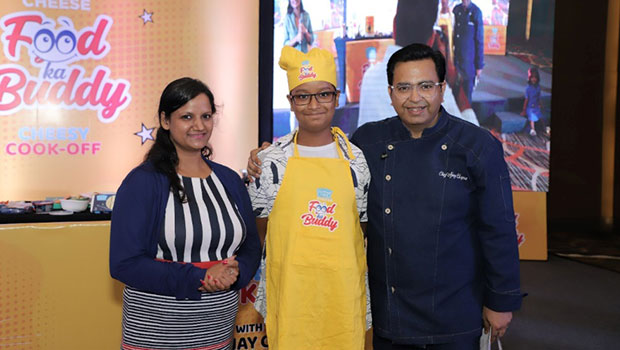 Mother Dairy Cheese, in collaboration with Wavemaker India, conceptualised and organised the Cheesy Cook-Off with celebrity chef Ajay Chopra. This event was an extension finale of the ‘Food Ka Buddy Campaign’, which featured online live sessions through Cheese Ki Paathshala.

The cook-off was organised at Hotel Holiday Inn, Aerocity, Delhi. Momspresso was the trusted partner to bring this IP to life.

The objective was to highlight the nutritional value of cheese, as it often plays as a substitute ingredient in a child’s diet (who are picky about eating). The online sessions had kickstarted earlier in July with Cheese Ki Paathshala with two live sessions, conducted on July 27 and 29, on Momspresso’s and Mother Dairy Fresh Delights’ Facebook pages.

10 participants were further shortlisted from these sessions from Delhi NCR for the finale, joined by 9 influencer moms along with their children, who participated in the Cheesy Cook Off- live-cooking session at the venue.

To throw light on cheese and its health benefits, an exclusive session was also organised with Nutritionist Vandana Verma during the finale. She stressed on the importance of overall nutrition and a balanced diet, and milk benefits followed by the importance of cheese and the nutrient punch it supplies in a child’s diet.

It was an interactive session wherein she addressed the parents' concerns regarding their children’s diet, how to deal with picky eaters and the overall constituents of a healthy diet.

When it came to how to incorporate cheese into their children’s dishes, the parents were guided by Chef Chopra. On the menu for the day were Nutella Cheese Pancakes and Cheesy Sandizaa made from Mother Dairy Cheese.

Chef Chopra said, “It’s amazing to see the kids take an interest in cooking. And with the parents chipping in, it’s truly a perfect picture of teamwork. This activity not only gives an opportunity for children to get live exposure to preparing the dishes but allows them to bond with their parents.”

He also went around tasting the dishes made by all the participants and after a healthy round of tasting, Arush Gupta and his mother, Richa Gupta were declared the winners of the Cheesy Cook-Off.

Arush said, “I am elated today to have won this trophy. I am so glad that Chef liked my skills.” His mother added, “He spends a lot of time in the kitchen cooking up some delicious dishes as he wants to become a chef. This trophy is surely a great motivation for him to follow his dreams.”

A Mother Dairy spokesperson said, “This campaign in particular, has been testament to the fact that Mother Dairy Cheese with its great taste and creamy soft texture lends itself well to be used in a variety of foods – including snacks, international and Indian cuisines – offering the right blend of taste and nutrition. It was indeed heartening to see our patrons showcasing their culinary skills along-with their little ones. We thank everyone for their involvement and participation, thereby curating an experiential initiative full of learning and fun!”

Mansi Datta, Chief Client Officer and Office Head – North and East, Wavemaker India, said, “When we think of Mother Dairy, we think of a caregiving nourisher who is always there for you. Which is evident with the brand’s tagline, ‘Rishton Ka Swaad Badhaaye’. We wanted to play on that and create a higher desire for Cheese among the TG as children love it. That’s how the team came up with Mother Dairy Cheese Food Ka Buddy where all these little one’s got to play and cook with cheese as much they liked and the mothers became friends & cheer leaders for the child, rather than a guardian. Although it was all about cheese, it did turn into a sweet moment between them both.”