Conceptualised by Leo Burnett, the week-long campaign kicked off on August 22, with an image that claimed the discovery of a new galaxy of dancing stars titled #JDJ10 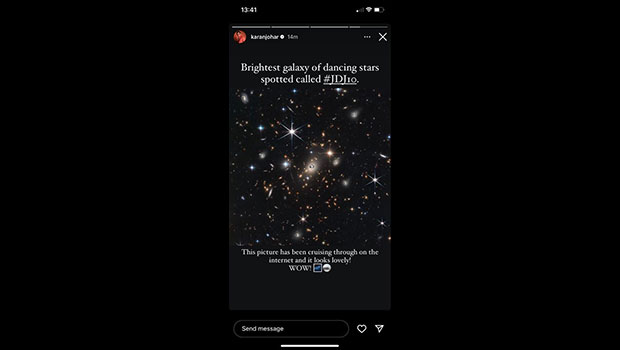 Fuelling the spark of excitement amongst the fans, who had been eagerly waiting for the show’s comeback, the channel curated a larger-than-life campaign split into three phases.

Conceptualised by Leo Burnett, the week-long campaign kicked off on August 22, with an image that claimed the discovery of a new galaxy of dancing stars titled #JDJ10.

The cryptic picture piqued the curiosity of netizens who came up with many interesting theories about the image.

The pre-launch campaign of ‘Jhalak Dikhhla Jaa’ was inspired by NASA’s widely circulated ‘deepest picture of the universe’ seen through the James Webb space telescope. Colors seized the momentum generated by the photograph to create an image of its very own galaxy named the ‘Galaxy of Dancing Stars’ #JDJ10 that included the show’s iconic disco balls as stars.

From well-known celebrities such as Karan Johar, Madhuri Dixit Nene, Nora Fatehi, Nia Sharma, Niti Taylor, Rubina Dilaik, Nyyrra M Banerji amongst others to paparazzi’s, influencers, news channels, and renowned journalists shared the image. The activity was executed as a third-party endorsement without any mention of Colors or the show to create further intrigue.

To ensure that the fans had their daily dose of mystery, each day snippets of information about these dancing stars were revealed through various sources. Leaving no stone unturned, the channel also collaborated with Urfi Javed, a fashion sensation on social media. Javed first posted the image of #JDJ10 and was then seen donning a shimmery glamourous look inspired by the viral galaxy of dancing stars #JDJ10 the next day.

Further lending authenticity to the campaign, Colors partnered with news channels to run aston bands, tickers, and anchor vignettes in the form of breaking news. This was followed by an association with radio channels for RJ mentions and handshakes, coupled with digital content published across channels to sustain the intrigue and build conversations around #JDJ10.

The ‘Galaxy of Dancing Stars’ campaign concluded with a big reveal at the grand launch party which witnessed the stars descending on the stage quelling all the curiosity around the image.

The party was attended by the contestants, host, judges, influencers, actors from the Colors’ family who walked the red carpet along with the media fraternity in Mumbai. The contestant and the judges made a spectacular entry grooving on the hit tracks which preceded a starry photo op.

As per the channel, overall the campaign grabbed eyeballs on social media along with tremendous news coverage with a reach of 65 million+ and 15 million+ views.

Sapangeet Rajwant, Head, Marketing and Digital, Hindi Mass Entertainment, Viacom18, said, “Colors has always been at the forefront in delivering campaigns that leverage the latest innovations and trends in the marketing and digital arena. It was imperative that the campaign resonates with the grandeur and the glamour of the show and therefore we designed the ‘Galaxy of Dancing Stars’ based on the trending deepest picture of the galaxy. This campaign successfully engages with the audience on a deeper level by generating curiosity, sustaining it through various collaborations and then making a big reveal of the stars. We actioned this robust campaign across platforms to ensure that the buzz has a wider reach. After a five years hiatus, we are confident that this season will be worth the wait and regale the fans with much fanfare.”