Riding on the legacy and powerful fandom of MTV Roadies, Viacom18 Youth, Music, and English Entertainment cluster is all set for its second NFT drop on Fully Faltoo NFT 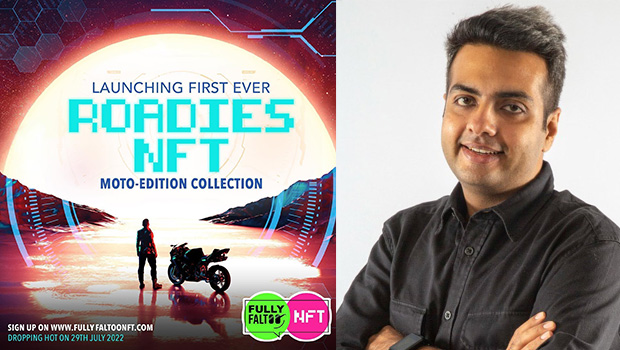 One of India’s most popular youth adventure reality shows, MTV Roadies, has just marked the end of Season 18 and its popularity amongst the millennials and GenZ just keeps growing.

Riding on this legacy, Viacom18 Youth, Music and English Entertainment has announced that its second drop of NFTs, Roadies Moto edition, will go live on its Fully Faltoo NFT showcase on July 29 at 6 pm.

“Roadies is one of India’s longest-running iconic youth shows and since this is our first show-centric NFT drop, we have actually tried to create the digital artworks for the Roadies Moto drop keeping in mind the rich legacy of the show and have added a story angle to each NFT,” said Anshul Ailawadi, Head of Viacom18’s Youth, Music, and English Entertainment cluster.

The digital artworks will be available to purchase globally on Fully Faltoo NFT marketplace across two categories- Loot and Rare.

The Roadies Rowdy’s Loot category will have 4,444 freshly-minted NFTs which allow individuals to bid for digital collectibles like Chomeheads Helmet FTW, Stunt Squad A, and Second Skin Jacket at a starting price of $10, based on a random allocation upon purchase.

The Lost-Dimension Rare collection consists of nine static and animated NFTs which will be available for bidding at a reserve price of $99. The Rare NFTs include digital art pieces like The Roadie-Tripper’s Kaleidoscope, Cyberpunk 2200: The Last Great Hope and Wander Women among many other NFTs.

Emphasising on what utility can the NFT buyers derive from their purchase, Ailawadi went on to say that the Rare NFT owners will be entitled to an exclusive collectible from Sonu Sood’s costume kits for MTV Roadies Season 18 and will comprise jackets, sweatshirts, denim, and sneakers worn by him.

Also, the top ten Roadies Rowdy’s Loot NFT buyers with the maximum number of Loot NFTs will receive 1 VVIP couple access pass for the on-ground launch event of the next Roadies Season, which will be the 19th Season of the legacy show, as per Ailawadi.

Ailawadi also went on to add that the entry of Viacom18 into the NFTs is just the perfect beginning of their Metaverse plan. “We are strategizing on our plan as of now. But we will definitely have something in the phygital world at the right time,” he said.

He also said that the main target audience for the Roadies Moto NFT drop would be GenZ first and then comes the die-hard fans of Roadies followed by the NFT enthusiasts and bikers not only in India but across the globe.

Moreover, what came as a surprise to many was that in the past couple of days starting July 20, MTV was seen changing its on-screen logo into an 8-bit format.

“The 8-bit format logo change on MTV was to mark the start of the new Journey for Roadies as it transitions from television to the NFT verse. However, this is not a permanent change and MTV will return to its logo as the drop goes live on July 29,” clarified Ailawadi.

Commenting on Fully Faltoo, which earlier was a show that ran on MTV and has now become the go-to place for Viacom18’s NFT showcase, Ailawadi said, “Fully Faltoo is one of Viacom18’s properties that targets the current generations. So while carrying forward Fully Faltoo we decided to revise it and set it apart as a brand on YouTube, which itself has a massive audience base of over two million subscribers. So we decided to launch Fully Faltoo NFT as a marketplace of our digital artworks and now it has become an umbrella for all our NFT showcases.”

When asked how will the new NFT drop on Roadies be impacted by the Government deciding to charge taxation on profits earned from an NFTs sale, Ailawadi said, “With the NFT coming under the purview of taxation, people are now becoming more curious as to what is the actual value of an NFT. In fact, it is a good time for the NFT market as we can now see more serious and genuine people participating in the NFT bids and acquiring them.”

Post the launch, the Roadies Moto edition would thereafter be listed on Open Sea, the world's first and largest Web3.0 marketplace for NFTs and crypto collectibles.