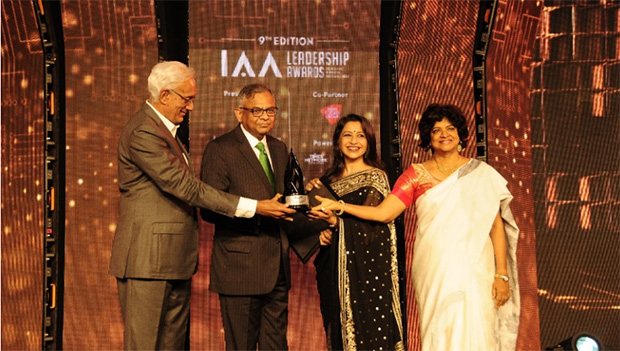 N Chandrasekaran, Chairman, Tata Sons has been honoured as the Business Leader of the Year at the IAA Leadership Awards 2022.

Chandrasekaran, upon being asked about the formula to success, said, "Running business in general is like a marathon and running Tata Group Business is like an ultra-marathon. These businesses have a lot of history and legacy so I don't think there is a magic sauce. If requires a lot of team work, the right people, focus, lot of hard work and some luck. So, all of this plays a part, hard work plus luck makes the magic sauce.”

He added that the biggest strength for the Tata group is its ethos and values which is deeply ingrained in the people.

Further, IAA Force for Good was received by Sonu Sood, an individual who has gone beyond and helped those in need across the country, particularly during the pandemic.

Diageo India was the presenting partner, India Today Group the co-partner while Times Now and ABP Network were powered by partners for the event.

Megha Tata, President, IAA India, said, “When we talk about the year that was, it was such a silver lining to the dark clouds, that we all witnessed in 2020. A year of facing challenges though, these ones maybe a little more complex than before. Last year has also been a year of recovery for business and while the market is slowly coming around, it is these leaders who have led people and organisations towards growth and success. So, this evening is dedicated to all you leaders who have gone beyond the pressure of time and opportunity lost during the pandemic and have shown great resilience and adaptability to the new way of doing business.”

Nandini Dias, Co-Chair - IAA Leadership Awards, said, “Across the 15 categories that will be awarded today, we assessed over 200 companies. a shortlist of 10 companies per category were picked out. Besides considering aspects like change in growth, advertising to sales ratio, market share, profitability etc. This year our jurors also started considering the ESG rating. Unlike any other award, IAA doesn't share any entry fee for the participation, they aren't even aware that a body is doing such meticulous study, which makes the award way more prestigious.”

IAA India inducted Shashi Sinha into the IAA Hall of Fame. Shashi mentioned Dr. Kurein's role as a mentor in his advertising career. He also added that "when Anil Kapoor joined the organisation he changed the face of the organisation we worked for, he taught me everything, gave me courage of conviction but more importantly the concept of ‘biradri’, that you must do work for your organization but also for your ecosystem.”