First ratings of Sudhir Chaudhary’s show on Aaj Tak are out; here’s how it performed

On the 9 pm band, Chaudhary’s new show ‘Black & White’ on Aaj Tak crossed the 1,000 TVT mark within the first three days, which is higher than the rolled average of any other news channel at 9 pm in Week 29 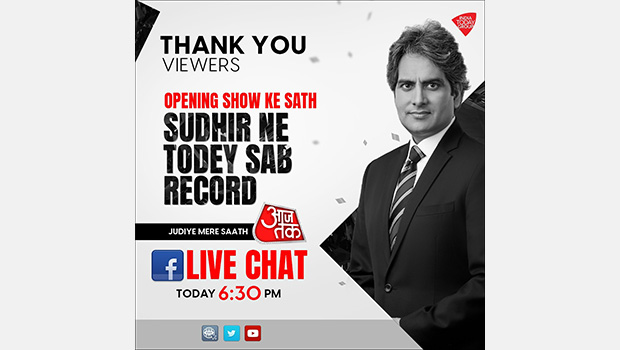 After Sudhir Chaudhary made his debut on Aaj Tak on July 19, all eyes were on how his new show ‘Black & White’ would perform on TRPs chart.

Choudhary had quit Zee News on Friday, July 1, but he went off-air in the same week on Monday.

The latest viewership data released for the rolling Week 26-29 (June 24 - July 22) covers Zee News ratings without Choudhary, where he was hosting the popular show DNA at 9 pm slot.

On the other hand, it covers only four days of his show’s performance on Aaj Tak.

Choudhary’s four days on Aaj Tak have boosted the channel’s performance at the 9 pm band.

On the basis of unrolled data (not comparable with competition) sourced from insiders, the channel witnessed a growth of 39% growth on the first day over the previous unrolled week, 54% on the following day and 60% on the day after.

On the 9 pm band, Chaudhary’s new show ‘Black & White’ on Aaj Tak crossed the 1,000 TVT mark on an average basis within the first three days.

The contribution of the 9 pm slot to Aaj Tak’s overall viewership is now 15% compared to 11% earlier.