The two movies are slated to premiere on the channel on June 25 and 26, at 8 pm, respectively 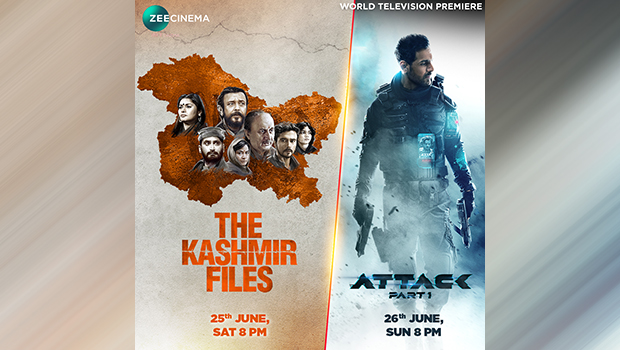 Zee Cinema is all set to present the world television premiere of ‘The Kashmir Files’ on June 25, followed by the full-blown sci-fi action thriller ‘Attack’ June 26.

‘The Kashmir Files’ struck a strong connection with audiences and critics alike. The colossal conversation rounds and overwhelming response from the global viewers at the box office is what holds testament to what sincere storytelling with riveting execution is capable of.

Donning the role of Pushkar Nath Pandit, Anupam Kher has given one of the most defining performances of his career in ‘The Kashmir Files’. The film also has gripping performances from Pallavi Joshi, Mithun Chakraborty and Darshan Kumar in significant roles that left the audience in absolute awe.

A directorial marvel by the award-winning filmmaker Vivek Agnihotri, ‘The Kashmir Files’, uncoil the saga of Kashmir’s history in the voice of the Kashmiris. Recounting the tragic event of exodus of Kashmiri Pandits in 1990 in its honest form, left the world spellbound.

Anupam Kher said, “Being someone who has Kashmiri roots, this film was also instrumental in bringing back a lot - memories of cherries coming into my house through a window back in Baramulla, the pleasantness of Kheer Bhawani, Nishad Garden, and Dal Lake that I keep thinking of even after having travelled the world. The Kashmir Files is an impeccable example of how a mid-budget film with an impactive story can reach such great heights. For the audience, watching it was an emotional experience. It was instrumental in bringing out a story that deserved to be told, striking a special and lasting connection with the viewers, and to any actor that means more success than anything.”

Director Vivek Agnihotri said, “This film is about humanity, it's about oneness, and with the response received, I believe the audience of the country, as well as outside, have resonated with it. The emotions that this movie has evoked in people, have left a lasting impression on their mind. I am a person with integrity. I want to work with talented people. My aim is to do creative work and showcase Indian films as a soft power to the world. The Kashmir Files has helped reinforce my belief in the strength of honest storytelling.”

“Vivek and I spent four years on the film, and three years on the research. We went down to victims’ houses, interviewed them, sat with them, and ate with them. Apart from my experience of being a producer for the film, my role was also really different from what I’ve done in the past, so this came as a welcome change for me. This is a story that needed to be told in all dimensions, with great fidelity, and a super-strong portrayal of every character,” shared Pallavi Joshi.

The advent of technology has taken Warcraft to a new height. While our weapons and strategies were upgraded with technology, ‘Attack’ took this invention to another level and introduced India to an AI-driven Super-soldier. The film showcases how tech-induced warfare helps to reduce any kind of human collateral damage.

With scintillating performances by John Abraham along with Rakul Preet Singh and Jacqueline Fernandez, the audience are set to be immersed in a wondrous experience of high-octane action, thrill, lined with an impactful story of patriotism.

Talking about the film, John Abraham said, “Attack is not a futuristic film, but it's a very relevant film. I believe that we might anticipate such technology a few years down the line. The idea with Attack was to challenge, so we are challenging the audience's mind and trying to do something different. If Hollywood can make it, why can’t India? It is my humble attempt to make India proud. We've all heard that films are made for masses or classes, but I don't think so. I only think there are two kinds of films: good films and bad films. And this is a good film that I believe families and people of all ages will enjoy. This isn’t a regular action film, but it is meant to put an important message across – nothing can come in the way for a true patriot, as he will fight for his country selflessly, and in all passion with a staunch belief that his nation comes ahead of everything.”

Rakul Preet Singh added, “Attack is a film I am proud of and will always be. Ironically, as a kid, I wanted to be a scientist and with this film, I got to chase that dream. We've seen Captain America and Iron Man on international levels creating a space in global audiences' minds. Attack is a great experiment from India. It's an under-explored genre. More than an actor, after looking at the film as a viewer, what personally spoke to me deeply was how John’s character fought against terrorism selflessly, and relentlessly portraying the essence of a true patriot despite all limitations. Today, we're a part of a great space. I feel all kinds of cinema and experiments are being celebrated and it is this sentiment that will shape the industry from now on.”

Attack moves along the quest of a super-soldier who has lost everything and puts his life on the line to serve his nation, willing to make the ultimate sacrifice.