Venacava also designed the neEV logo and created the brand guidelines, including the film and its various surrounds 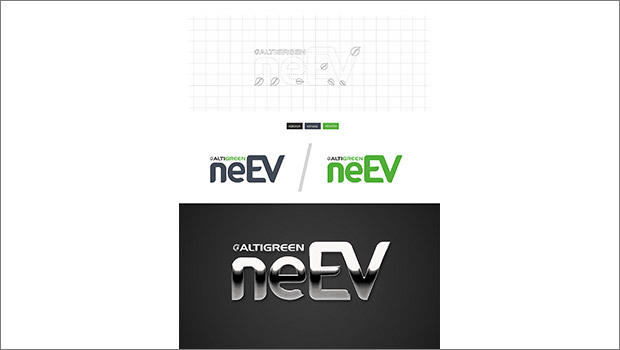 Altigreen neEV, as per the makers, is a sturdier and much powerful vehicle, it has another phenomenal differentiator that sets it apart from any commercial vehicle of its kind: it could go over 150 kms on a single charge.

The initial brief given to Venacava was to piece together a film of an activity wherein this unique promise would be showcased. It was a drive from Mysore to Bangalore without recharging and they would have to capture this in an interesting way.

Sitting and brainstorming with the creative team, they decided this fantastic promise could become an iconic idea that would be etched in people’s minds using a powerful yet simple metaphor.

In today’s world where information is oversaturated and hardly ever retained, what was needed was some visual symbol to stand out and stick in people’s minds. So, when people see neEV they equate it with that symbol instantly.

Venacava went back to Altigreen and Amitabh Saran, their CEO, was instantly excited about the idea. That’s how the camel was born. The vehicle that doesn’t chug electricity incessantly. A camel that can cross a vast desert with a minimal amount of water.

Venacava even designed the neEV logo and created the brand guidelines, including the film and its various surrounds.

“Designing a brand identity from scratch is always an exciting opportunity. And it all begins with the logo. On top of that, this was for a new age vehicle so the nuances had to be different. Simple yet elegant, minimalist to accommodate a sense of the future, keeping also in mind the offering of the brand,” said Manoj Deb, Founder and CEO, Venacava Designs.

“From time immemorial, visual storytelling has been the language of lasting impression. Be it in culture, history, mythology, or brand building. A powerful imagery not only evokes a sense of awe but also becomes etched in people’s imagination, making the brand memorable. We hope the camel will break the clutter and make neEV a category defining brand,” said Anirban Sen, Creative Partner, Venacava Designs.

“We wanted to work with an agency that could understand an engineer’s want and translate it into a visual treat for mass consumption. Deb and Anirban were that perfect combos that got it right the first time. They worked tirelessly to get real life footage in Rajasthan during peak summer months. At those temperatures, even camels don't like to listen to instructions! We got a great film, on time and within budget!! Thanks, Team Venacava,” said Amitabh Saran, CEO, Altigreen Propulsion Labs.

“The challenge was how to make the brand famous. Altigreen needed a story that would create the feeling that the brand was remarkable in covering long distances without refuelling. Manoj and Anirban found the perfect metaphor,” said Subhabrata Ghosh, Director, Altigreen Propulsion Labs