Created and conceptualised by the in-house team at Disney Star, the campaign film features Anurag Thakur, Union Minister of Sports & Youth Affairs, leading the support for the next generation of heroes 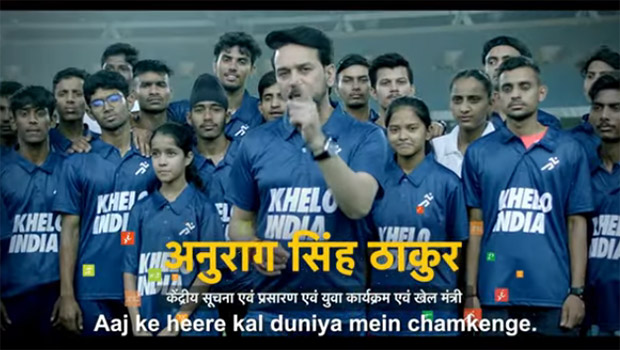 Star Sports, the sports broadcaster, has launched its campaign #UmeedSeYakeenTak ahead of the fourth edition of Khelo India Youth Games (KIYG).

The event will kick start on June 4, at Panchkula (Haryana) and will be aired Live and exclusive on the Star Sports Network and Disney+ Hotstar.

Created and conceptualised by the in-house team at Disney Star, the campaign film features Anurag Thakur, Union Minister of Sports & Youth Affairs, leading the support for the next generation of heroes.

The film also shares a glimpse of two-time Olympic medalist PV Sindhu and Tokyo Olympics gold medalist javelin star Neeraj Chopra in their element, as they raise the adrenaline and inspiration quotient for the 8,500+ participating players.

Speaking about the campaign ahead of the fourth edition of the Khelo India Youth Games, a Star Sports spokesperson said, “The exemplary performances of our athletes at the various global multi-sporting events stand testament to the emotion that we are now at the cusp of transforming hope into belief when it comes to winning medals globally. Disney Star, together with the Ministry of Sports and Youth Affairs, intends to realise this shared vision through the launch of our campaign #UmeedSeYakeenTak. With the aim and commitment to make Khelo India Youth Games one of the largest annual youth sports events in the world, Disney Star will provide a more vibrant coverage for youth sports and help create many young heroes this season.”

The multi-disciplinary event will see heroes being created in 15+ sports along with the introduction of five indigenous sports – Gatka, Thang-ta, Kalarippayattu, Mallakhamb, and Yogasana.

Harnessing the tremendous potential of the country in sports, providing youngsters a sound footing with dollops of inspiration and top-notch infrastructure, the Khelo India initiative has become a strong framework to make India a multi-sporting nation.

Sporting talents like shooters Manu Bhaker, Mehuli Ghosh, Saurabh Chaudhary, and weightlifter Jeremy Lalrinnunga have been some of the finds of KIYG and have gone on to represent the country at either Olympics, Youth Olympics, or Commonwealth Championships.

Watch 8000+ young athletes across India take on each other at @kheloindia 2022, the platform that shapes up our future sporting heroes!