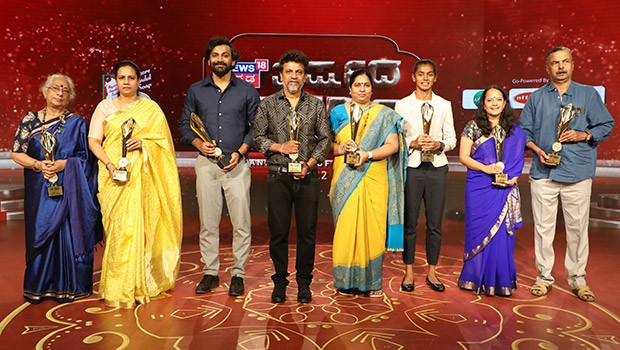 Continuing its legacy to laud and celebrate remarkable achievements in various sectors through its flagship property Varshada Kannadiga,

The flagship event was held at JW Marriott, Bengaluru. The marquee property, held in the presence of guests and Sandalwood stars, was presented by Mysore Sandal Soaps, and Co-powered by Amrith Noni, Attica Gold Company, and Rohan Corporation.

Viewers got the opportunity to witness the entire coverage of the grand celebration that recognises the unnoticed and extraordinary individuals of Karnataka, exclusively on News18 Kannada on March 30, 2022, at 5 pm.

The winners across different categories included N Jagadish Koppa – for Literature, Dhananjay – for Entertainment, Karunashraya – for Social Service, Pushpa Patil – for Business, Krithi Karanth – for Science & Technology, Priya Mohan – for Sports. The Lifetime Achievement Award was awarded to B Jayashree, a Jury Special Award to Puneethraj Kumar and the ‘Varshada Kannadiga’ to Shivaraj Kumar.

Kaloji said, “We are delighted to felicitate individuals and organisations from Karnataka whose contributions have strengthened the foundation of our state and society. News18 has always recognised these trailblazers across their properties and award ceremonies and I thank them for awarding the unsung heroes from the state and giving them their due recognition.”