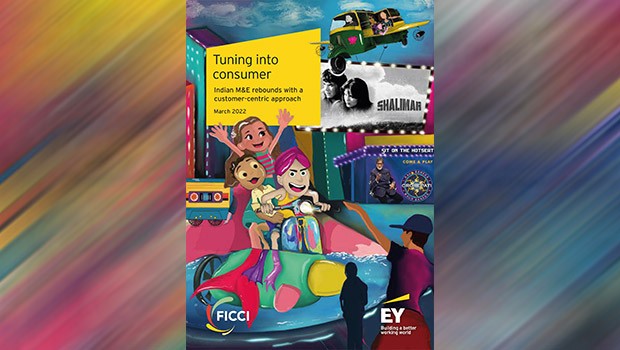 As mentioned in the report, the key contributors to this growth will be digital, films and television (together adding 65% of the growth), followed by animation and VFX (14%) and online gaming (7%).

While television remained the largest segment, digital media cemented its position as a strong number two segment followed by a resurgent print.

Excerpts from the report are mentioned below:

The growth in advertising across mediums

At Rs 746 billion, advertising recovered to just 6% below 2019 levels. While digital advertising grew Rs 55 billion, the highest growth was in television advertising of Rs 62 billion, followed by a growth of Rs 29 billion in print.

Overall, subscription revenues were 18% below 2019 levels due to:

Television advertising grew 25% to end 2021 just 2% short of 2019 levels. Subscription revenue continued to fall for the second year in a row; experiencing a 6.2% de-growth due to a reduction of six million pay-TV homes and a fall in consumer-end ARPUs. Connected TV sets, however, increased to 10 million. Time spent on TV fell 8% from 2020 levels and was slightly lower than 2019 levels for Hindi speaking markets.

Print advertising revenues grew 24% in 2021, though ad rates remained subdued. Subscription revenues saw a growth of 12% on the back of the recovery in direct to home and newsstand sales as well as rising cover prices. Corporate sales, metro circulation and English dailies remained under stress, though the situation seems to be improving.

Despite people going back to work as the effects of the pandemic receded, and regulatory uncertainty, the online gaming segment grew 28% in 2021 to reach Rs 101 billion. Online gamers grew 8% from 360 million in 2020 to 390 million. Real money gaming comprised over 70% of segment revenues.

At 57%, this was the fastest-growing segment in 2021, as content production resumed, service exports increased and the industry adopted virtual production.

The segment grew 20% over an extremely depleted base, primarily due to the relaxation of event curbs in a few states and increase in vaccination rates; however, revenues were just 40% of 2019 revenues. It appears that pure digital events are here to stay: they have been adopted across several product and service categories.

Most investments were made in digital media and gaming, with one marquee deal in TV. New media accounted for 86% of the deal volume in 2021.

Sanjay Gupta, Chairman of, FICCI Media and Entertainment Committee, said, “The past few years have been times of intense struggle for the Indian Media & Entertainment sector. COVID-19 rained a flurry of problems and challenges all over the world. But we never gave up. With our utmost hard work and dedication, we continued to produce films, web series, digital programs and music and remained on our path to make our industry self-reliant. I’m happy that today India’s media and entertainment sector is flourishing worldwide. The industry’s value is likely to touch Rs 2.3 trillion by 2024.”

Jyoti Deshpande, Co-Chairman, FICCI Media and Entertainment Committee, added, “2021 saw an explosion in the Indian creator economy where more than half a million bloggers, vloggers, content creators, artists, educators, musicians, influencers etc were actively posting content on their various social media channels to directly build an audience around their niche. Another success story is the large growth in content support that India’s animation and VFX segment provides leading global content studios. This combination of technical know-how and creativity could propel Indian stories and storytellers onto the world stage powering the ‘Make in India and Show the World’ mantra.”

Ashish Pherwani, M&E Sector Leader, Ernst & Young LLP, said, “India has always been a different kind of media and entertainment market. High on volume and low on ARPU, yet up top with the rest on technology and ahead of the pack when it comes to digital adoption. We love quantity and bundles, but we pay for value. We are amongst the top smartphone markets; and have a large feature phone base. We subscribe to global OTT platforms; yet binge on YouTube and watch free satellite TV. And we are thirsting for curated knowledge and escapism while creating millions of pieces of content each day ourselves. Never have Indian consumers been more powerful in determining what content and experiences are produced, when and where they need to be delivered, and how they need to be marketed.”