The latest addition, is a homegrown Assamese OTT platform known to bring alive the culture of Assam in all its glory by blending entertainment with education 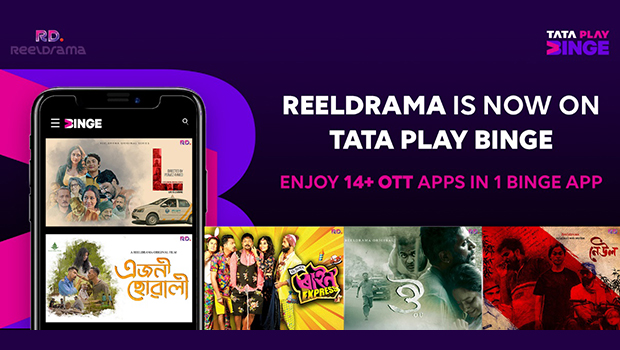 Tata Play Binge has announced another OTT partner integration to the platform. ReelDrama, an OTT platform for bespoke Assamese content will now be available on Tata Play Binge.

Expanding its regional offerings, Tata Play Binge with its partnership deals with 18 OTT apps, endeavours to present viewers compelling content from all major and regional players across the country in just one click.

With 18 apps under one roof, the platform hosts an extensive library of movies, TV shows, web originals, and live sports.

The latest addition, ReelDrama is a homegrown Assamese OTT platform known to bring alive the culture of Assam in all its glory by blending entertainment with education.

Tata Play's Chief Commercial and Content Officer, Pallavi Puri said, “One of the ideas behind Tata Play Binge is to bring to the fore diverse content from various cultures of India into the mainstream. ReelDrama’s content slate consists of Assamese cult movies and new-age cinema from the region, which we believe will add another flavor to the entire offering of Tata Play Binge.”

ReelDrama Director, Kuheli Dasgupta said, “The objective of ReelDrama is to provide an alternative platform for talented Assamese filmmakers to showcase their craft to a larger section of Assamese- speaking viewers. The association with Tata Binge will aid our effort to reach out to a wider audience, not only in Assam but also in the entire country.”