As part of the initiative, the platform will continue to add six to ten new titles each month, apart from a bumper release of 18 titles on December 2 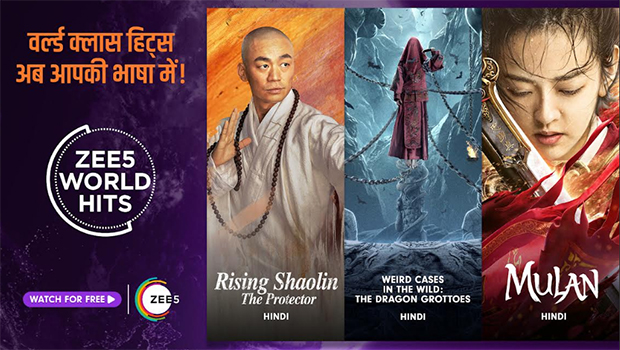 Zee5 has introduced ‘Zee5 World Hits’- through which it is bringing a slew of premium and successful international titles dubbed in Indian languages, at zero cost.

Launched in October 2022, so far, the platform has brought over 40 international movies, including some exclusives.

As per the video streaming platform, the campaign has witnessed an overwhelming response from the audiences, especially for titles like Rising Shaolin and The Python (exclusively available on Zee5); Mulan and War of Thunder to name a few.

As part of the initiative, the platform will continue to add six to ten new titles each month, apart from a bumper release of 18 titles on December 2.

Zee5 World Hits features global hits like Rising Shaolin, The Python, Marshal Mu Guiying, Uncaged, Dragon and more, several of them are exclusively available for the audiences on the platform.

Additionally, a number of war and costume drama portrayals like Mulan, War of Thunder and The Golden Horde are also part of the library.

Audiences will also be able to enjoy movies like Partition that feature iconic Indian stars Irrfan Khan and Vinay Pathak.

Abhirup Datta, Head – AVOD Marketing, Zee5, said, “We designed the campaign, Zee5 World Hits, to empower our audiences with choice and improve accessibility and availability of premium content in multiple languages. Our aim with this campaign is to bring exciting stories from across the globe to Indian viewers in their preferred languages, in a bid towards democratizing quality content. While most of these titles are now available in Hindi, we have been adding Tamil, Telugu dubbed versions, as well as some movies in original languages in the coming months. With this, we expand our AVOD offerings and hope that the world hits are enjoyed by our existing viewers as well as attract new audiences on the platform.”

“In line with our vision of entertainment inclusion, we recently announced the Zee5 Manoranjan Festival 2022, where we made some of the most popular and premium titles across languages available at zero cost. During the 7-day festival 35+ premium titles were available for the AVOD audiences from across genres – thrillers, fiction, romance etc.”