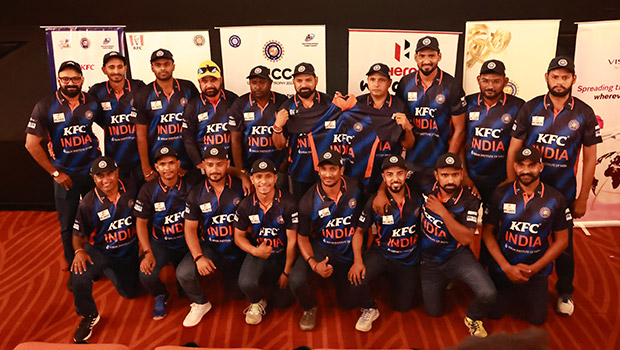 The unveiling ceremony took place in the presence of Support Partners, board of IDCA and the Indian Deaf Cricket team who will represent India at the championship trophy scheduled to be held in Sharjah, UAE from October 1 to 9.

Roma Balwani, CEO of the Indian Deaf Cricket Association, stated, “DICC T20 Champions Trophy is an excellent platform to promote sports among specially-abled people. And our team is elated to represent India in this five-nation global tournament which includes Australia, South Africa, Bangladesh and Pakistan. We are all set for the championship and are looking forward to our team proving their mettle on the pitch. We thank each and every person, sponsor, support partner, corporate, CSR teams who has shown faith in us and request them to keep showering their love to players. Their support will motivate our players to give their best on the field.”

IDCA President Sumit Jain said, “Our players are well-prepared and pumped up for the upcoming championship trophy. They are ready to put up their best game against their contenders to vie for the prestigious title. I wish them luck and success.”

Former Team India cricketer, Yuvraj Singh in a letter to the Indian Deaf Cricket Team playing at the DICC T20 Champions Trophy 2022 (UAE), said, “I would like to extend my heartfelt wishes to the most inspiring Players, Board Members and Office Bearers of the Indian Deaf Cricket Association. It is very heartening to see the great strides you all are taking forward for the growth and development of the IDCA which is providing tremendous opportunities to talented players from across the country. My best wishes to the entire team for the upcoming DICC T20 Champions Trophy 2022 in UAE. I am sure you all will do your best and make the country proud.”

The specially-abled team India is set to put its best foot forward against the competing countries in the DICC T20 Champions Trophy 2022 (UAE). IDCA has also rolled out the #DareToDream campaign in India to promote differently-abled cricket and to drive other developmental aspects around the lives of the differently-abled youth in the country.

A number of brands have come forward to support the non- profit association in their quest to promote Deaf Cricket nationally and internationally.

· Hero MotoCorp have also joined hands with the Association as the Social Cause Partner under the aegis of Hero “We Care’ a Hero MotoCorp CSR initiative for this championship trophy and promote cricket among specially-abled individuals.

· INOX Leisure is the Official Partner of the IDCA team and are promoting the tournament cinemas and are showcasing it in their campaigns on cinema screens and lobby displays across the country.

· Air Arabia is the UAE Hospitality Partner and will host the team in Ajman supported through Sharjah Charity International.

· Global Indian airlines, Vistara and IndiGo are the official Travel Partners who will fly the IDCA contingent to Dubai.

· Kaizzen, the communication’s agency is the official Media Partner.