This time, after a gap of two years the festive season is likely to be celebrated without any kind of restrictions, and brands are trying to capitalise on this by rolling out creative and ingenious campaigns aimed at wooing consumers 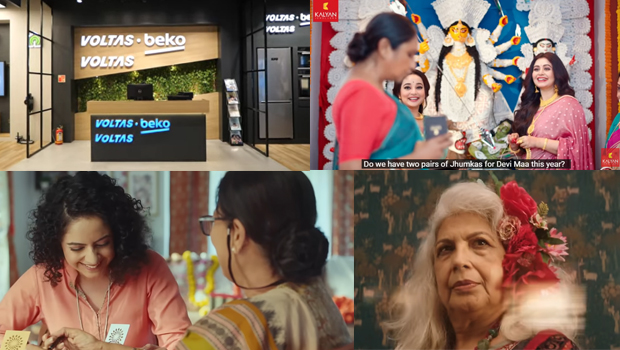 With the festive season in full swing and Navratri already starting, brands have rolled out campaigns to add to the merriment of the season and to welcome the Goddess home.

This time, after a gap of two years the festive season is likely to be celebrated without any kind of restrictions, and brands are trying to capitalise on this by rolling out creative and ingenious campaigns aimed at wooing consumers.

Here’s a look at some brand campaigns revolving around Navratri and Durga Puja 2022:

Voltas is welcoming Navratri in a digital avatar. On this auspicious occasion, the brand has organised a nine-day Festive Mela at its Experience Zone located in Prabhadevi, Mumbai. The #VoltasKFestiveMela campaign was started on September 26 and will go on till October 4. The campaign will witness influencers visiting the Experience Zone and giving their audiences a real-time walk-through of the Sustainability Zone, Smart Home, Modern Home, Architect Space and Hygienic Home showcasing a range of futuristic products from Voltas and Voltas Beko.

Kalyan Jewellers is celebrating the occasion of Durga Puja with the launch of its updated Sankalp collection, which was unveiled through a new digital ad film. The campaign features the brand’s regional ambassador for the state of West Bengal – Ritabhari Chakraborty, who is seen flaunting the traditional Bengali-style jewellery from the jewellery brand’s Sankalp collection.

The film pays homage to the hands that work around the clock, hearts that love unconditionally, eyes that see the best in everyone, and smiles that make one melt from within and celebrate the Goddess in every individual.

Sankalp from Kalyan Jewellers – For the Goddess we see in you!

Tata Tea Gold is bringing alive the joy of Durga Puja celebrations with locally-designed festive edition series and an experiential immersive site to get into the feels. It is celebrating the festival by launching a special series of 15 festive edition packs inspired by the state’s rich ‘Shilpokala’- which is done by artisans of Bengal.

Paying a musical tribute to the changing tones of Sharodiya, and to celebrate the recognition of the festival as a world heritage by UNESCO, Asian Paints has launched their new film for Sharad Shamman. The film opens in the 80’s, exploring the journey of a music video through decades. Marked by retro music, complete with disco riffs and octa-pad beats, the 80’s move on to the 90’s, with pop rock signatures of the times. The song progresses into the 2000s, with the first flushes of electronica. Each decade is represented by an Asian Paints paint can from the times. The film echoes the core sentiments that styles and customs may change, but the spirit of Sharodiya stays the same.

Right ahead of Navratri, Instashield’s #KhudKiPehchan campaign urges viewers to respect feminine energy and view women as equal citizens. Featuring veteran screen icon Himani Shivpuri and model and actress Ismeet Kohli as a mother-in-law and daughter-in-law duo. The film has powerful social messaging and a subtle commentary on social divisions and patriarchal norms.