The show starting on September 3, Saturday and Sunday, 7 pm, will feature Badshah as the judge, with other Indian rap trendsetters EPR, King, Dino James and Dee MC as Squad Bosses 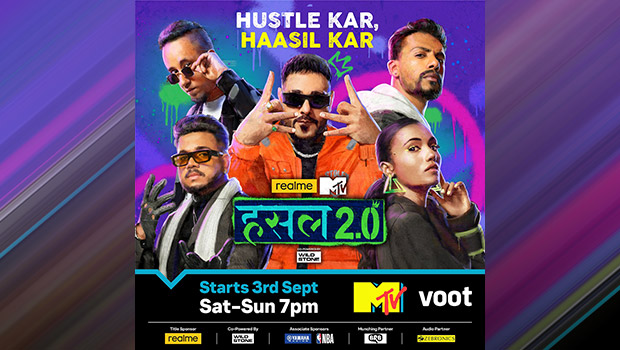 The show will feature global artist Badshah as the judge, with other Indian rap trendsetters EPR, King, Dino James and Dee MC as Squad Bosses, starting September 3, every Saturday and Sunday at 7 pm on MTV India and Voot.

Badshah and the four Squad Bosses will groom and judge the contestants based on their talent, performance, meter, technique, musicality, and storytelling. Viewers will also get a chance to be a part of the journey to root for their favourite performer through public voting on the VOOT app and watch out for the ‘Squad of the Week’ and ‘Performer of the Week’ as the show progresses.

Anshul Ailawadi, Head – Youth, Music, and English entertainment, said, “MTV Hustle 2.0 is an ode to India’s rap scene – it puts the spotlight on undiscovered talent and celebrates an art form that is amongst the youth’s foremost passion points. This season goes deeper into the country to offer tomorrow’s hip-hop icons their biggest canvas, today.”

Suchita Shah, Head, Content Originals at MTV, said, “It’s bigger and fiercer this season! Realme MTV Hustle 2.0 is all about discovering untapped rap talent to the fore and bringing their unique stories to viewers and music lovers across the nation. That fire and passion which drives rap music in all its glorious diversity are what makes the concept tick. The latest season elevates the rap battleground like never before, with the new format, judge and squad bosses!"

Aradhana Bhola, Managing Director, Fremantle India, said, “Bringing under the radar talent into the limelight is something we are passionate about at Fremantle. And when the stage is an iconic youth platform, unfolding the magic of rap music and inspiring life stories with the uber talented Badshah in the house, the excitement of MTV Hustle 2.0 becomes palpable.”

Tao, Marketing Head, realme India, said, “We are happy to collaborate with MTV India, a channel which caters to the demands of young audiences in the entertainment industry. The second season of MTV Hustle is certainly an opportunity for young music enthusiasts to explore possibilities for them and showcase their talent. Moreover, it aligns with our vision of giving more and highlights participants’ dare to leap attitude among young users. The strategic partnership highlights realme’s commitment to providing high-quality tech-lifestyle products and deep integration towards music.”