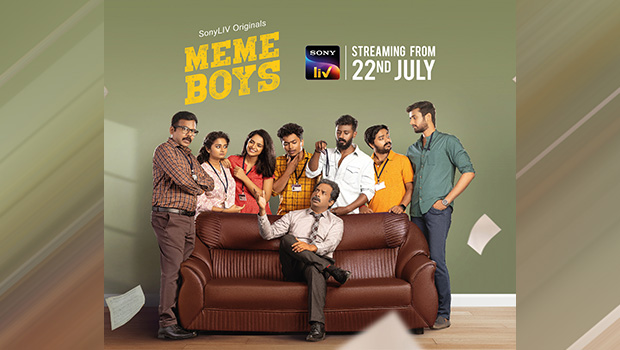 SonyLIV is all set to present its first Tamil original – ‘Meme Boys’, an 8-episode series that will stream from July 22, exclusively on the platform.

The 21st century digital entertainment tool, ‘Memes’, cracks people up like no one’s business. A simple picture with a quirky line can result in a riot of laughter, often going viral.

A major source of entertainment nowadays, sharing memes with friends and laughing together is trendy. Memes are ruling the internet with every topical conversation. Keeping the trend in mind, SonyLIV is bringing forth this show.

Produced by Rainshine Entertainment, the quirky comedy-drama narrates the story of four unassuming friends, who launch an anonymous social media page – Meme Boys --- shedding light on their oppressive college administration with a punch of humour.

However, what starts as an innocent fun exercise, soon revolutionises the entire college, birthing a movement of sorts in no time. With memes taking the college by storm, a cat-and-mouse game kicks off between the Meme Boys’ gang and the Dean. Who wins this thriller is something you need to watch out for in the show?

Meme Boys will also be available in Telugu, Hindi, Kannada and Malayalam.

Arun Koushik, Director, said, “Memes are an integral part of our lives these days. It is impactful, witty, and a modern tool of satire. Meme Boys focuses on this style of entertainment and what follows with it. With the backdrop being an educational institute, I am certain the younger audience will resonate with it strongly. I am delighted to bring this story in collaboration with SonyLIV, Rajiv Rajaram and Drishya Gautam. I am looking forward to a brilliant response.”