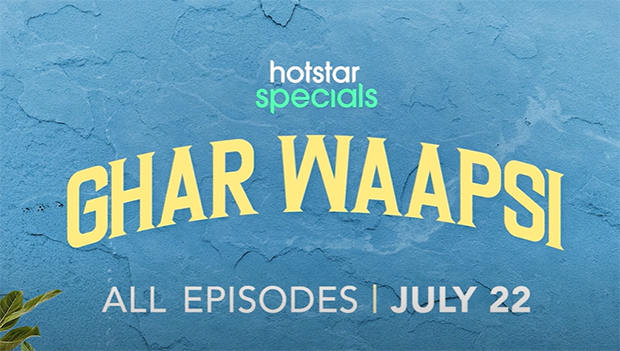 Disney+ Hotstar and Dice Media are all set to present an all-new modern-day slice of life show, ‘Ghar Waapsi’.

The short 6-episode Hotstar Specials, releasing on July 22, is a millennial tale of the trials and joys of reconnecting with family and friends.

The show marks Disney+ Hotstar’s first association with Dice Media and Ashwin Suresh served as the showrunner in the series.

Written by Tatsat Pandey and Bharat Misra, ‘Ghar Waapsi’ offers viewers a chance to take a deep breath and slow down with its heart-warming coming-of-age storyline. The series follows the members of the Dwivedi family as they deal with life’s trepidations. The light-hearted family drama based in Indore, shows a middle-class family of five coming together as they each learn something about life, relationships and aspirations from each other, presenting a joyous journey of healing and finding direction.

Director Ruchir Arun said, “With Ghar Waapsi, we bring before the audience a fun, light-hearted tale of going back to one’s roots. At a time when most of us have moved to different cities in pursuit of our ambitions, revisiting our roots can bring us solace and a much-needed break. With this story, we set out to share just this with laughter and emotions. The show is a breezy, cheerful watch that celebrates life and its uncertainties. Extremely happy to have had Disney+ Hotstar and Dice Media as a part of the journey to bring this unique story to viewers.”

Actor Atul Srivastava said, “While playing a father in Disney+ Hotstar’s Ghar Waapsi, I surprisingly felt like a millennial. You keep hearing this generation talk about taking a break, pursuing hobbies, and not giving in to pressure, and my character Mr Dwivedi does all that despite being a father to three children. It is a character that makes you slow down and appreciate life. Grateful to the writers of the show for creating such a heart-warming role that brings out a different flavour of fatherhood on screen. Can’t wait to see how the audience reacts to the show.”

Actor Vishal Vashishth said, “I am extremely excited about my role in Ghar Waapsi. It seems like a simple character on the surface, but the simple roles are the most challenging. Working with veteran actors like Atul Srivastava and Vibha Chibber for this Disney+ Hotstar show helped me discover a lot about my art. Working with Dice Media has always been a great experience. Hoping the tale of the character connects with the audience.”

Ashwin Suresh, Showrunner on Ghar Waapsi, said, "We’ve always been known to create real and relatable shows at Dice Media. This time we wanted to explore a close-knit family setting in a non-urban milieu and their moments of joy and strife. A premise which originated after the pandemic - what happens if you lose your job and move back home to live with your family after a gap of a few years? A premise which found resonance in our circles as well as with the folks at Disney+ Hotstar. This show is the product of a wonderful team effort, which we’re excited to share with the world. We hope we can inspire a few of those stuck in the rat race or caught up with the trappings of a ‘well settled’ job, to pause, and to ponder - “Top pe jaane ke chakkaron me hum kahin use najarandaaj to nahin kar rhe hain, jo pratyaksh hai, acha hai, aur khush rehne ke liye kaafi bhi hai?”