aha to stream world digital premiere of ‘Sammathame’ on July 15 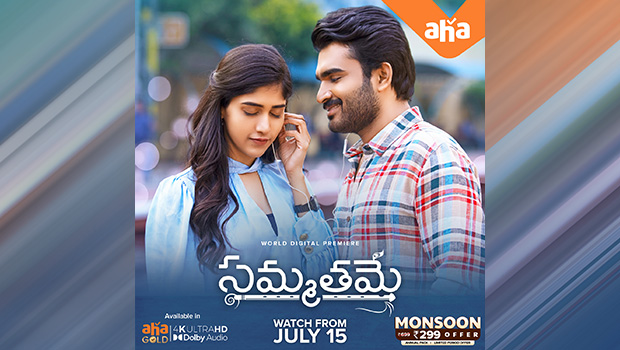 aha, the local OTT platform, is all set to take its viewers on an adventure on July 15 by streaming the world digital premiere of the romantic comedy film ‘Sammathame’.

After presenting ‘Ashoka Vanamlo Arjuna Kalyanam’ last time around, aha will present the roller coaster love story between the leads, which will surely keep the viewers at the edge of their seats as it premieres on July 15 at 12 am.

Written and directed by Gopinath Reddy, ‘Sammathame’ stars Kiran Abbavaram and Chandini Chowdary in lead roles. The urban romance explores what happens when an independent woman crosses paths with a man who tries to make her conform to his way of life.

Krishna (Kiran Abbavaram) is a small-town guy who has grown up feeling a void after losing his mother. This software engineer's only goal is to marry a woman who would fill that void. When he moves to Hyderabad and falls in love with Saanvi (Chandini Chowdary), who likes to hang out with a mixed group of friends and does not mind a drink or two, the conflicts begin. The crust of the story is how Krishna overcomes his insecurities and embraces his love for Chandini.

With many twists and turns in the tale, Sammathame is a must-watch.