Commencing on June 23, the season will be available for cricket enthusiasts and viewers across India, on the platform for free 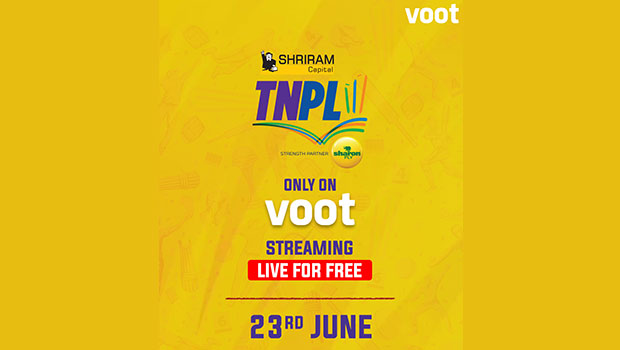 Voot is all set to partner with Shriram Capital’s Tamil Nadu Premier League (TNPL) to bring the sixth season of the league for its viewers.

Commencing on June 23, this season will be available for cricket enthusiasts and viewers across India, on the platform free of cost. This initiative will add to the repertoire of diverse content on Voot and provide enhanced content choices and experiencers for its audience, as per the platform.

Launched in 2016, TNPL has grown to become Tamil Nadu’s premiere Twenty20 cricket league. The league consists of eight teams representing eight districts in Tamil Nadu and will have 32 matches in total. While the opening match for the season between Chepauk Super Gillies and Nellai Royal Kings will live stream on June 23, the finals will live stream on July 31, at 7:15 pm.

“The streaming of sports content, especially cricket, on OTT platforms has created a massive viewership base and Voot has emerged as a big player in recent times in this segment. We hope this association will make TNPL more popular by bringing in new viewers,” said Tamil Nadu Premier League, Secretary, R S Ramasaamy.

Chanpreet Arora, Head, AVOD (Voot), Viacom18 Digital Ventures, said, “Tamil Nadu is an extremely important market for Viacom18 for both entertainment as well as sports. Given the league’s increasing popularity, as a brand we wanted to ensure that Tamil Nadu Premier League is available to a wider set of audiences. The competitive nature of the league is very engaging. We as a brand have always looked out for opportunities wherein, we are able to make quality content available for viewers across India. We are looking forward to bringing in more value for the league and giving it a platform for it to scale-up and reach newer heights.”