One in five of our customers are watching Indian content & doing so outside of India: James Farrell of Amazon Studios 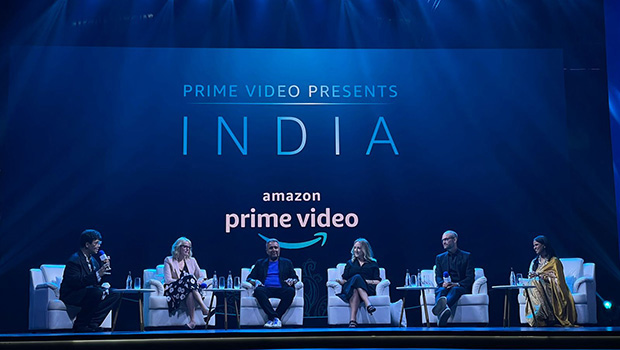 Streaming giant Amazon Prime Video recently unveiled its biggest content slate in India. It consists of over 40 new titles, in Hindi, Tamil and Telugu, across original series, original movies and co-productions that will be released on the platform over the next 24 months.

At an event held in Mumbai to unveil the same, the leadership team of the platform took part in a fireside chat with filmmaker Karan Johar about their future plans and vision for Amazon Prime Video in India.

During the fireside chat, Kelly Day, VP International, Amazon Prime Video, said India is one of their fastest-growing markets. She further credited the Indian team at Amazon Prime Video India for its success. “I think one of the things that is really interesting is that India is truly an innovation hub for us. A great example of that is our Prime Video Mobile Edition (PVME) service. India is the first market where we rolled out a mobile-only service for our customers here. PVME has done quite well in the country and we are using that as a launchpad to roll out the mobile edition product in a variety of countries all over the world. Therefore, I really see the opportunity here in India, to continue to innovate, to continue to serve customers, and to continue to learn how we can build on that and expand Prime Video all over the world.”

The announcements also include the launch of Prime Video Store, its transactional video-on-demand (TVOD) movie rental service in India, which will allow Prime subscribers as well as non-subscribers to access movies on rent. They also announced a few multi-year licensing deals and co-productions with some of India’s biggest studios like Dharma Productions and YRF.

Day added that Amazon Prime Video follows a multi-pronged strategy for India. The platform has forayed into original movies and got a number of direct-OTT releases on the platform. To cater to the sports viewership demand, they also recently launched a live sports offering.  “Over the next five years, our plan in India is to double the investment that we just made. We consider India to be one of our most strategic markets and we are going to continue investing in a truly differentiated service here,” said Day.

Gaurav Gandhi, Country Head, Amazon Prime Video India, meanwhile said that movies are an important vertical for them in India. He said when they launched movies on the platform, by entering into partnerships with production houses, the response was phenomenal.

“We realised the fact that we can play a very important role in getting the films to the customers. We are taking one step forward there with original films now which we are announcing today, and of course, expanding on co-productions such as ‘Ram Setu’, amongst others. With the launch of our movie rental service, I believe it is one more way for customers to consume content besides joining Prime so I think this way we are fuelling the creative economy, by playing a role so that everybody can make more movies and content for our customers.”

According to James Farrell of Amazon Studios, Indian content on Amazon Prime Video is performing well across the world. He said the Amazon India original- ‘One Night Stand’ will soon be adapted for the German audience. “One in five of our customers are watching Indian content and doing so outside of India.”

“You're seeing amazing, innovative stuff, and we're going to see more of what's coming up this year now. Not only are shows travelling but ideas are starting to travel the world,” he added.

The panel further spoke about how the platform is empowering the talent of women and different sections of society through their stories. According to Jennifer Salke, Head, Amazon Studios, the platform’s central philosophy is to be the home for talent, one that you can see and feel across the globe.

“All the incredible shows, all the scenes and all the shows one is going to hear about and the foundation, content on the service, none of it happens without incredible talent and artists who have big imaginations and can execute at the highest level. So being the home for talent for us means having the best teams on the ground.”

Adding to this, Aparna Purohit, Head of India Originals, Amazon Prime Video India, said they want to create a home for talent, a community and a safe space where creators feel supported and they feel that you're willing to invest in them.

“We want to bring to life the vision of our creators, enable them and empower them. Finally, I would like to say that my team and I call ourselves the story chasers. We will go across the length and breadth of a country to find a good story and really develop them. I also feel that we do not ever dictate. We never let the creator's vision gets diluted. So, we believe in casting for the characters. We have been a platform for so many new, talented, emerging independent voices. Almost 50% of our releases have new talent and 70% of our upcoming slate has been talent. We believe we are enablers, the storytelling chasers.”