Through this docu-series, ABP Studios aims at introducing the layman to the effervescent landscape of Bengal politics. It's a way of analysing Bengal's modern political history through the eyes of the state's eight Chief Ministers 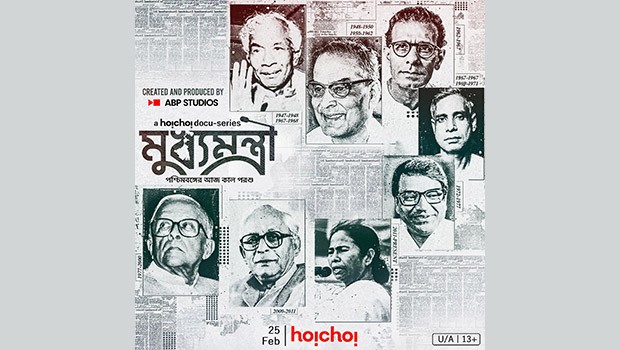 The docu-series has been made by the Bengali Director – Indranil Roychowdhury. It is presented by Pratik Dutta and Shaoli Chattopadhyay.

Through this docu-series, ABP Studios aims at introducing the layman to the effervescent landscape of Bengal politics. It's a way of analysing Bengal's modern political history through the eyes of the state's eight Chief Ministers.

ABP Studios explains that many of the difficulties that characterise modern-day West Bengal are entrenched in the recent and distant past in ways that we rarely comprehend. While the common man tries to understand it through the lens of daily news, they rarely obtain a clear picture of the events that led to today's difficulties and challenges.

Hence, an in-depth examination and dissection of Bengal’s former and current political environment becomes important to navigate through the intriguing events that took place over the years, which led to the formation of the West Bengal as we know it today.

Furthermore, ABP Studios is also collaborating with emerging national and international talent, as well as National Award-winning writers and filmmakers, to realise their larger aim of bringing local stories to a worldwide audience. They are also excited about developing and presenting content from its recent acquisitions in adventure, horror, and crime drama genres.

Zulfia Waris, Business Head, ABP Studios, said, “We are thrilled to have forayed into Bengal with our very first docu-series. It's a never-before told story about the history of West Bengal told through the tenures of each of its illustrious chief ministers. We are committed to use our rich 100-year-old archive of stories not just nationally but internationally as well. ‘Mukhyamantri’ marks the first of many shows that ABP Studios will produce in the future that have its roots in the state.”