The e-commerce giants have intensified the battle as they eye markets beyond tier two cities and are expected to spend at least 15% of their yearly marketing budgets this festive season. TV will hold higher share to the tune of 50%, followed by digital at 25-30% and rest for all, including print and radio 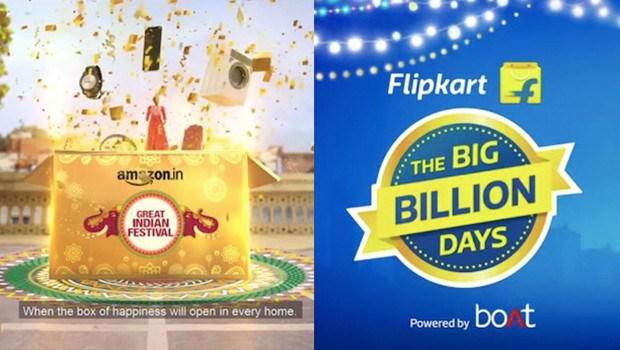 E-commerce companies Amazon and Flipkart may clock $9 billion in gross festive sales, surpassing the pre-pandemic business of $5 billion during the festive months in 2019, according to estimates by media and brand experts.

While brands have their own expectations and plans for the festive sales drive, e-commerce players are upping their ad spends by up to 40% to attract consumers towards their special deals and offers.

Ramsai Panchapakesan, Senior Vice-President and National Lead, Integrated Media Buying at Zenith, said the overall festive ad spends will go up by 10-12% compared to last year, and expected to touch Rs 26,800-34,490 crore, of which e-com will be nearly Rs 380 to 410 crore.

“The top two e-com giants will spend nearly  Rs 325-350 crore in the festive quarter on the back of their Dussehra and Diwali sales IPs, ‘Big Billion Days’ and ‘Great Indian Festival’. This has been consistent in the last so many years. Consumers wait for the sale to open,” he said.

This festive season coinciding with the cricket season will mark an epoch in the history of advertising owing to the shift in consumer behaviour online, experts say.

Flipkart, which is vouching on the star power of Virat Kohli, Amitabh Bachchan, Alia Bhatt and many others for its Big Billion Days campaigns, is offering discounts and deals for many big brands.

Apart from the special deals, Amazon’s GIF 2021 is dedicated to lakhs of small sellers, including over 75,000 local shops from 450 cities, who are offering their unique selection of products to customers across the country.

Ajio, whose festive sales begin from September 30 till October 4, has on-boarded multiple celebrities, including Sidharth Malhotra and Sonam K Ahuja for its #BigBoldSale campaigns.

Myntra is expecting 5.5 million customers to shop during its ‘Big Fashion Festival’, slated to be held from October 3 to 10, as it is set to showcase its biggest collection of one million styles. It, too, is strongly eyeing markets beyond tier two and three cities, which contribute around 40% of its total demand.

Snapdeal has opened up 130 new distribution hubs ahead of the festive season. It is also betting high on lower prices for quality products available in the market and has released the campaign in multiple regional languages.

According to RedSeer's consulting report, e-commerce players are expecting new growth from tier two, three cities and beyond this festive season, which are likely to contribute $150 million to e-commerce growth this year. And with higher targets this year, these brands would be spending at least 40% higher than last year on advertising, with majority share going to TV and digital.

Amazon and other major players had cut down their spending last year due to the pandemic situation but things seem to be picking up.

Preetam Thingalaya, Director of Media at Mirum, said that to cover up for last year and this, one could easily park another 25% increase in spends at least for this year over the budgeted number.

“India as a market has always been the ‘festive-based spender’ – both as a consumer and as a marketer. Festive might just be the season when most brands break even for the year or move into profits. Over time, we have seen this strategy work for many brands,” he said.

The festive season is like a prime time for these brands, and Indian consumers tend to make good purchases during this period, including big-ticket items.

Prasad Shejale, Founder and CEO, Logicserve Digital, said brands will not only up their ad spends significantly this year but will tend to focus on all the possible mediums and platforms to attract more and more audiences. He foresees bottom-funnel channels growing and sees video channels witnessing huge growth as there is a dire need to break the clutter nowadays.

Strong mix of print+TV and digital

This year since, consumer sentiments are better and the market has opened up to the maximum extent.

Panchapakesan said that the mix of expenditure will be pretty similar to 2019’s levels. “Television will hold a higher share to the tune of 45-50% followed by digital at 25-30%, and the rest 20-25% for everything else, including print and radio. On the digital part, the spends will get further split into performance and display/branding. All display communication will have an opportunity of remarketing. The approximate split would be 60:40 between performance and display,” Panchapakesan said.

But Dhawan believes that media planning is definitely slanted towards digital this year.

“This festive season could make us witness maximum growth in digital advertising owing to the biggest online reach driving properties such as IPL, Big Boss, KBC, World Cup, etc. Front page ads in newspapers have also shown an incline recently, which will continue this festive season,” she said.

From online to offline platforms, Thingalaya said, everyone will go out this season. Every third ad on television today is an online-based product offering, so there will be a significant amount of frequency on almost all platforms he said.

But, on the contrary, Saurabh Jain, Managing Partner, South, Havas Media India, said brands such as Amazon and Flipkart might even lower their media investments to some extent. Most e-com brands saw profitability in 2020, when growth was substantially higher than marketing input. E-commerce saw a massive surge in the last one year owing to the pandemic, which greatly helped e-comm brands in achieving organic growth with minimal investments in new customer acquisition. However, in 2021, these companies will face pressure to maintain the profitability trend, resulting in cutting down of spends on all fronts, he said.

“While several reports project a 40% growth in sales during the festive period, marketing spends by e-commerce brands is expected to remain at the same level as 2020, if not slightly lesser. Digital media stands to gain more from the festive season, followed by print (which has recovered its circulation) and TV (led by T20 World Cup),” he said.