Youth from across the country join #DNAFightsRape initiative, pledge to make India rape-free

In a month-long activation that started on July 17, the World Day of International Justice, compelling messages and posts on social media are garnering huge attention. The aim is to spread awareness about the importance of DNA evidence in sexual offences 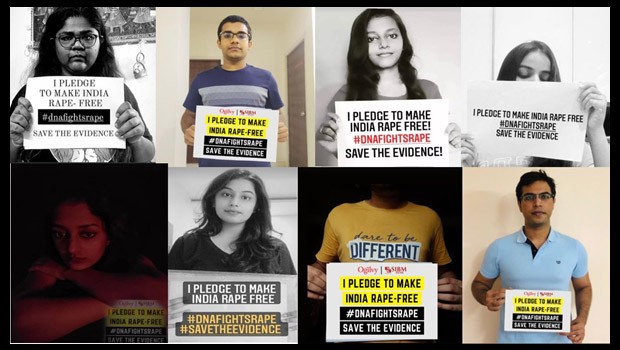 Students and young working professionals from across the country join #DNAFightsRape initiative to make India rape-free, as India enters its 75th year of independence. Realising the importance of DNA evidence in sexual offence and rape investigation, active participation from the youth is seen to drive awareness on the role of a common person in saving the DNA and in expediting justice.

Sr. Advocate Vivek Sood said, “DNAFightsRape, in my view, is a significant initiative in contemporary times. Proving rape in cases where the perpetrator cannot be identified due to muffled face or darkness or where the victim is killed, is a big challenge in the courts. Also, oral evidence in cases where the accused is identified may not be enough to secure conviction of the accused due to fading memories of witnesses or aggressive and intimidating cross-examination by defence lawyers, leading to contradicting and falsifying even the real rape victims. Hence lies the importance of DNA evidence, which can identify the perpetrator even after decades of the incident. It is an authentic piece of evidence that can be used even on a stand-alone basis to track and punish the offender as also exonerate the innocent. Organisations such as Ogilvy are playing a very significant role by promoting DNA evidence in sexual assault cases. Ogilvy’s campaign of DNAFightsRape is a game-changer for the criminal justice system as also for the people at large. The heinous crime of rape is a crime against society and every citizen is affected by rape incidents, whether as the victim or relative of the victim, or as citizens who could be victims or their near and dear ones in future. Sensitisation of the police force, prosecutors, lower judiciary, and citizens about the importance of DNA evidence in rape cases is a mammoth task, especially in India that has a large population. The onus lies on every educated Indian with means to spread the usage of DNA evidence in sexual assault cases.”

In a month-long activation that started on July 17 World Day of International Justice, compelling messages and posts on social media are garnering huge attention.The campaign voices a sense of urgency to tackle the menace of rape and to make India a safer place for women and children. Arpit Mishra, a second-year student of SIBM College, Pune, has lent his voice to a thought-provoking musical composition highlighting the power of DNA. He urges the country’s youth to play an active role in driving the change.

Mishra, MBA student, (who lent his voice to the composition), said, “I am always on the lookout for interesting opportunities and being a part of #DNAFightsRape Art For Freedom (AFF) Challenge, is a matter of pride. I was a part of the dramatics club during my graduation, and we primarily worked on street plays on social issues. A few years back, we had performed a play on rape and eve-teasing, and my research during this phase appalled me. This is why I felt compelled to lend my voice to the movement through a poem ‘Chalo maan lete hain’. It is extremely gratifying to know that my work has been well received and it has created a positive impact.

“This motivated me to create yet another powerful message this Independence Day, on this burning issue through a rap composition. I’ve never rapped before and wasn’t too sure if I’d be able to do this right. But this was a great opportunity for me to show my support for the movement and the anger I have towards the agony women go through during rape. My conviction in the pledge to make India rape-free has made me write this rap. It’s been 75 years since we’ve been an independent nation, and it’s about time that women and children in our country are freed of this heinous crime of rape and any other offences such as eve-teasing.”

Arneeta Vasudeva, National Head PR and Influence Ogilvy India, said, “The campaign has touched millions of hearts by now and it is so good to see young men and women drive a serious effort to transform our society. Reaching out to people, making them aware of their role in combating rape and expediting justice through DNA is the main intent. And seeing the many different forms of creative expressions coming together through, musicals, videos, graphics, paintings, it reinforces my belief in the power of art and its ability to create a positive influence. This am sure can change the way people think and deal today with the issue of rape.”

#DNAFightsRape – Save the Evidence, a citizen awareness drive was launched on November 25, 2019, the International Day for the Elimination of Violence Against Women, in partnership with the Delhi Police, AIIMS, UN Women India, Red FM and MARD, with the aim to educate people on the role they have in saving the crucial DNA evidence and expediting India’s criminal justice system in sexual offense and rape cases. The movement further gained momentum with several partners like Gujarat Forensic Sciences University (GFSU) and Girl Up (UN Foundation), youth from several colleges across India endorsing it.

If you also want to be a part of the pledge by #DNAFightsRape campaign, post your image with a placard demanding for a ‘Rape Free India’ and tag them.

Gordon Thomas Honeywell – Governmental Affairs is a globally recognised public affairs consultancy firm with expertise in forensic DNA policy, legislation, and law. For nearly 20 years, consultants at GTH-GA have worked in over 50 countries and states on policies and regulation to establish or expand criminal offender DNA databases. GTH-GA collaborates closely with governmental officials, crime labs, police, and the industry. GTH-GA operates the DNAResource.com website that has been used as the world’s primary source for DNA policy information since 2000.