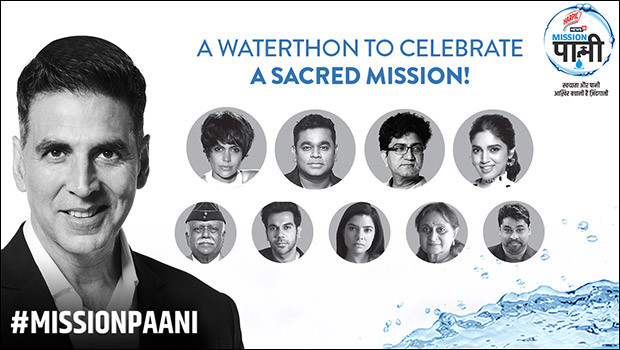 Launched in 2019, Mission Paani, an initiative by News18 and Harpic India, will culminate with 8-hour-long Mission Paani Waterthon on January 26. Hosted by Akshay Kumar, the campaign ambassador, the event will emphasise on ‘Paani Ki Kahaani, Bhaarat Ki Zubaani’, the theme to raise awareness about water crisis in India. The 8-hour telethon starting 12.30 pm will feature a host of eminent personalities from different walks of life take the Jal Pratigya, a water oath.

Water warriors, organizations and activists who’ve led from the front and made a telling contribution to the world of water conservation shall be recognized and felicitated for their efforts during the telethon. And making the day all the more engaging for viewers, the event shall feature live song and dance performances that will see Esha Deol in the opening dance act followed by Malini Awasthi, Shaan and the evergreen Indian Ocean. There will also be an underwater dance by Hydroman that is sure to leave viewers in awe.

The event will be telecast live on CNBC-TV18 and News18 Network.