The OTT platform has left no stone unturned to market its series Money Heist in India. From launching an anthem to creating stackable content to several activations, it has banked on every marketing trend to engage with the audience through pop culture 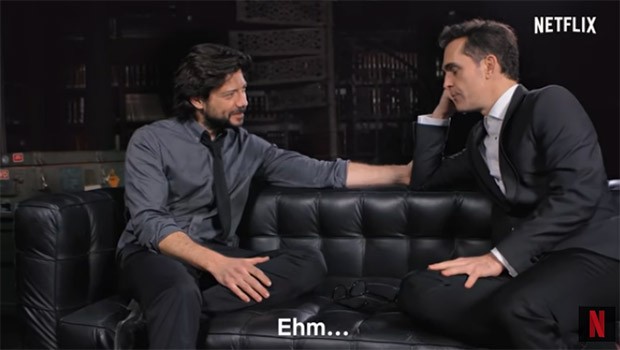 Money Heist’s story revolves around a mysterious man recruiting a group of eight people, who use code names of cities, to enter the Royal Mint of Spain and with the intention to come out with €984 million.

The OTT platform created several snackable content pieces around the series and made it more than interesting and larger than life.

For instance, two of the main characters, Professor and Berlin, were seen discussing the end of the show that garnered lakhs of views and engagement. This content piece was launched around its Season 4.

It also attempted to recreate Rio and Tokyo’s (two characters in the series) look with influencers Siddharth Kerkar and Larissa DSA.

The platform released several social media engagement posts such as comparing Money Heist Season 5 with cult Indian movies such as Hera Pheri for humour and fun.

In another collaboration with content creator Dhruv Rathee, it released a content piece to decode why the series became such a hit among the Indian audiences and why it is so relatable.

Even its extended bloopers were made into a fun and engaging video for the audiences.

Although the platform had announced Season 5 release date on May 24, 2021, it was followed by a teaser and then the trailer release. And in India, specifically, the show has been released in multiple languages, including Tamil, Telugu and Hindi.

To promote it, the brand released a campaign for the India market, which was conceptualised by Creativeland Asia. It has an anthem video named ‘Jaldi Aao’.

For its Telugu audiences, it released another video, ‘What If Money Heist Was Made In Telugu’, conceptualised by The Rabbit Hole.

It witnessed brand collaborations including one with Pepsi to celebrate the show’s premiere with its latest campaign and to increase its reach.

The digital film featured Tiger Shroff, who is on a mission to search for the missing golden cans, which was released to commemorate Season 5 of the show.

As soon as it hit the screens, Netflix India took over the Bombay Stock Exchange and paid tribute to everyone’s favourite gang in collaboration with Ananya Pandey (who calls herself the fan of the series).

The customary BSE bell was rung by fans donned in the iconic red jumpsuits and Dali masks, which was followed by a money shower. Pandey, who was hiding beneath one of the Dali masks, later surprised everyone with her reveal and joined the affair and watched a short exclusive preview.

And very recently, in a bid to remind people to continue to wear masks, it partnered with Brihanmumbai Municipal Corporation (BMC) and the Government of Maharashtra to help distribute one lakh masks across Mumbai. Conceptualised by creative agency The Glitch, it saw citizens dressed in red jumpsuits and Salvador Dalí-inspired masks.

While the Netflix India’s team confirmed to BuzzInContent that the platform has no more immediate promotional activities lined up around volume one, they said there might be something closer to the release of volume two of this season.

The Heist drama series was created as La Casa de Papel (The House of Paper) by Álex Pina and was initially aired on the Spanish channel Antena 3 in 2017.  Even though it was much appreciated among the critics, it soon had started to lose both viewership and revenues. After its Season 2 wrapped up, Netflix acquired its global streaming rights and recut it into 22 episodes of 50 minutes, and renamed it Money Heist. It added it to its international catalogue without any promotion.

Soon enough, the actors noticed a surge in their followers from across the globe on Instagram, which increases every hour.

It soon climbed to the second spot on IMDb ranking of Most Popular TV Shows in the world and even won an Emmy for Best Drama Series in 2018. While several celebs across the world started to rave about the series this year, football player Neymar even went on to do a cameo in its season three later.

By this time, red jumpsuits and Salvador Dali masks became symbols of political rallies and protests at various countries in America, Europe and Asia, including France, Lebanon, Iraq and Chile. Its musical centrepiece, Italian anti-fascist song ‘Bella Ciao’, has thousands of versions on the internet today, across languages.

Though Netflix made minimal noise on advertising, over time, subscribers found it, loved it, and turned the show to one of Netflix’s most shrewd gambles.