With 30 advertisers on board, Times Now Navbharat emerges as a strong contender in Hindi news space: Experts

According to top advertisers and media planners, the channel could disrupt the Hindi news space with its content strategy and brand equity 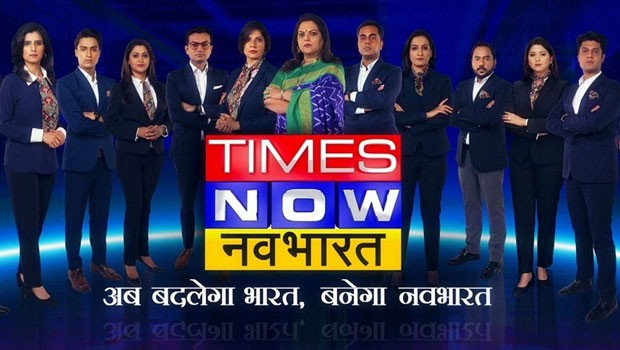 Launching a Hindi news channel with 10 advertisers as launch partners, and growing its advertiser base to 25-30 in a fortnight at a time when TRPs for the news genre are suspended, takes a strong brand equity, said India’s top advertisers and media planners on the prospects of Times Now Navbharat—the recently launched channel from Times Network.

The Hindi news channel went live on August 1 with its positioning of ‘Ab Badlega Bharat, Banega Navbharat’ and a distinctive identity with action-based journalism and credible content.

At the time of its launch, the channel had managed to take on board top advertisers such as Kent RO System, Century Ply, Vedanta, Medibuddy, Amrita Vishwa Vidyapeetham, Darwin Platform Group of Companies, Mylab Discovery Solutions, Meghdoot Herbal and Kirloskar Brothers.

Times Now Navbharat is the 15th national news player in the Hindi news genre and succeeding in such a cluttered space is an uphill task.

Explaining if there is enough demand from an advertiser’s perspective to accommodate one more player in the Hindi news genre, Mohit Joshi, CEO, Havas Media Group India, said, “​​News as a genre has gained huge demand and has increased its viewership over time owing to the pandemic and its uncertainties. Consumers want to stay updated with the latest news, Covid related rules and regulations, current and state affairs. News accounted for 10.4% of the total television viewership — of which Punjabi, Gujarati, Malayalam, Tamil, Marathi and Hindi news channels saw the maximum growth. With rural India showing signs of a quicker recovery compared to the urban markets and rise in consumer demand/sentiments amid the festive period, marketers will be surely looking at exploring vernacular mass mediums that offer localization, even in the absence of ratings.”

Amar Sinha, Chief Operating Officer, Radico Khaitan, said he believes in the channel’s brand equity both as an advertiser and a viewer.

“The name Times is synonymous with news in our country because we have been seeing Times since print days to electronic media. A large part of our Indian population lies in the Hindi-speaking belt and therefore Hindi news to me becomes critical. We are very happy that the Times Group entered the Hindi genre. I think they have the capability of disrupting the Hindi news genre. It's a positive move because the Times Now Navbharat proposition is very powerful to me as a news viewer.” According to Anita Nayyar, COO-Media and Communications, Patanjali Ayurved, the Hindi news category is quite cluttered and the kind of news features on the channels seem to be very similar.

“Everyone is using a similar language; there is more entertainment than news, too much noise, and sensationalism of everything. I think the Times network per se is known for its credibility. Even its English news channel carries a lot of credibility. Coming from the same house, it will be carried forward to Times Now Navbharat. It will be nice to see refreshing news, which will be true to the spirit of journalism and not very sensational,” Nayyar said.

India’s leading media planners suggest that advertisers are placing their bets on the channel largely due to its backing. Mansi Datta, Chief Client Officer and Head, West and East, Wavemaker India, said, “It comes from a network that has had experience in the TV news business for the last 15 years and from a national daily that has been there for the last 75 years. Editorially, they have the support of Navbharat Times, Times Now. The channel definitely will have its fan follower base owing to its lineage."

Sinha of Radico Khaitan feels that the biggest advantage of the channel is the brand name and the equity backed with strong management support and programming line-up.

“I have chosen Navbharat because of the brand equity. The backend support of any organisation needs to be strong to sustain itself. In good and bad times, they must have the strength to hold their value systems and at the same time be commercially viable. With Times Group, both these points get well taken care of. And secondly, Times Now has a good viewership and is the leader in the English genre. I am sure they will replicate that in Hindi,” Sinha said.

Datta of Wavemaker said the network has smartly picked up their editorial team with Navika Kumar leading as Editor-in-Chief from their stable along with a bevy of known anchors.

“From a content perspective, they have the infrastructure all mapped out and with such a strong follower base; it is expected to garner good viewership,” she said.

Asked how tough it is to invest on a new news channel in the absence of ratings, Nayyar said news channels are being watched across the country in the current atmosphere and are getting viewership. “Given this situation, one is purely going by the content on the channel,” she added.

Joshi of Havas Media said, “In the absence of ratings and numbers, we evaluate media on the basis of the content they provide. Our focus is to associate with media that connects with the brand’s target audience, is relevant and above all meaningful and ethical. Channels that offer an interactive and innovative news delivery whilst focussing on issues that directly impact the people will be preferred.”

Talking about his expectations from Times Now Navbharat as an advertiser, Sinha of Radico Khaitan said, “I have great hopes as an advertiser as well because if they do well, only then will the advertiser be doing well with the channel because at the end of the day we expect a return on investments that we are making.”

"From an advertiser’s perspective, there has certainly been an interest. It's been a fortnight since its launch and they have been able to get 25-30 advertisers. All in all, there is a sense of positivity around this channel," Datta of Wavemaker India concluded.