Why there is a need to look at OTT beyond data

Speaking at ZeeMelt, Punit Misra of Zee and Sameer Nair of Applause Entertainment discuss how data can be leveraged to take creative decisions 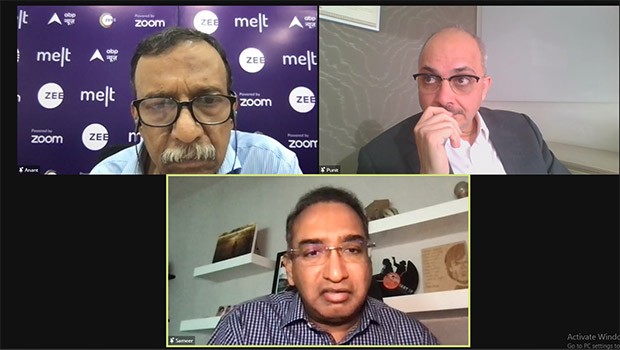 Data needs to be presented in a way that excites creative people, said Puneet Misra, President, Content (Linear and Digital) and International Business, Zee, during a conversation with Sameer Nair, CEO of Applause Entertainment, on Day 2 of the annual conference ZeeMelt.

Nair said while OTT might be new in the sense of the technology behind it and the way people are consuming the content; it is similar to linear because ultimately, they are distributing content.

Misra, however, said that “For TV and movie content, there is a fairly defined and a more homogeneous kind of audience that you can have in mind when you design that content. In that sense, the primacy was of the content creator and perhaps the viewer was so well understood, and intuitively known that you didn't really need to think of that vector as an added complexity when you created your content.”

Creators, he said, must look at this as a new world because today the audience is primary. He said catering one piece of content to audiences who are very different is a new complexity creators must acknowledge.

Nair, on the other hand, said that despite individuality, audiences exist in cohorts. “It will be incredibly impossible to do anything for an audience of one. While we may have individualistic viewing behaviour, at the end of the day we operate within a certain larger masses of behaviour approach.”

During the discussion, Misra pointed out the four Cs they are focusing on — consumer, content creating, content discovering, and content partnerships. “We are working really hard to make sure that our teams— whether it is the content creation team, or partners who we work with or our content discovery teams—get a lot closer to the viewer and their world. We keep talking about data and that is not something we will need to stop at; we'll have to figure out how we get great insights that we can serve to creative people, who then get excited about it.”

According to Nair, with the size of the OTT market today and the rate at which players are growing, there is a greater need for content creation than acquiring content. He said that for this to happen, a 100 more applauses are required in the country.

“Consumers have become accustomed to binge viewing. If you take about 10-15 key players, each of these has to put out at least two or four pieces of new content every month to make their monthly subscription valuable for the consumer. It's about 40 pieces of content every month.”

“So for the streaming business and the premium TV drama series to grow, we've got to create it; it doesn't exist. You can't buy any library from anywhere. So yes, a hundred more applauses will be useful,” Nair said.

Asked how the new laws affect the OTT business, Misra said he would not like to make use of the word law but term it as a framework. “I think that's really where you need both creativity and common sense, to not allow creativity to get into zones that may be offensive. I would like to stick with the conversation by saying, have a framework, have self-regulation; and handle exceptional cases that breach the framework in a way that the message is loud and clear.”