The #ZimmedarRahoUPIKaro campaign highlights how people are effectively managing their responsibilities towards themselves, their family and society and how UPI enables them to fulfil them

India displayed extraordinary preparedness and took proactive efforts to support the citizens of the country in these difficult times. Numerous responsible citizens came forward amid the humanitarian crisis and displayed empathy. Several unsung stalwarts were seen putting their best foot forward to alleviate the suffering of the people in need as well as underserved communities.

As an ode to the selfless acts meted out by the citizens, the National Payments Corporation of India (NPCI) salutes their efforts in taking up the responsibility to stand by the needy during these distressing times. It extended its existing ecosystem initiative UPI Chalega to launch the #ZimmedarRahoUPIKaro campaign.

While we are still amidst a pandemic, NPCI is amplifying the UPI Chalega message with a renewed theme of Zimmedari, “being responsible”. The campaign in the form of digital films highlights how people are effectively managing their responsibilities to themselves, their family and to society and how UPI enables them to fulfil those responsibilities seamlessly.

In one of the ad films, a resident is showcasing responsible behaviour by helping her maid to pay her doctor’s fee via UPI as it is interoperable and payment can be sent from any payment to any payment app or from any bank app. In another film, a teacher is instantly able to handle her grocery chores through UPI so that she can fulfil her job as a teacher in a responsible way.

One more film is about how a daughter is nudging her father to be responsible and donate for Covid-19 relief fund which he pays via UPI. There are other films too on the theme of ‘zimmedari’, which are inspiring and heartening at the same time truly reflecting the meaningful ways in which people have been responsible.

While following responsible digital payments, it’s critical to follow safe usage of UPI. Rao, who continues to be the protagonist since the UPI Chalega campaign, advises customers to follow four safety tips while using UPI. 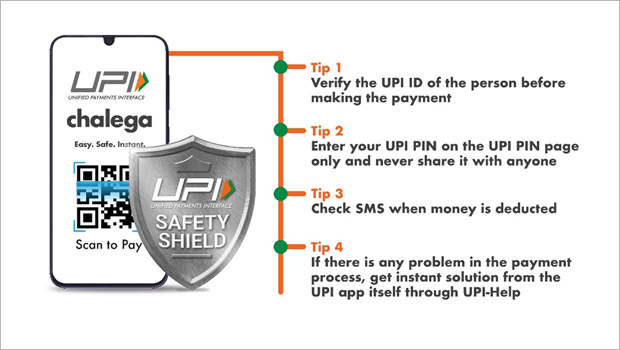 Celebrities, including Virat Kohli, Pratik Gandhi, Saina Nehwal, Sonu Sood, Dilquer Salman and Tridha Choudhary have come forward to support this campaign. Through video posts on their social media handles, they are seen educating their fans and followers to be responsible by transacting via UPI, which is a safe, contactless and secure mode of payment.

Through UPI, sending money is easy, safe, instant and contactless. For everyday expenses, monthly bills or other essential transactions, I rely on UPI as it enables me to make responsible digital payments with zero physical contact. #ZimmedarRahoUPIkaro @upichalega pic.twitter.com/P0cEhUs6F3

For myself & others around me, I've been taking every precaution possible. Digital payments have been my greatest saviour as they reduce contact. I trust UPI for digitally paying all my daily & monthly expenses. It is instant, simple, and secure#ZimmedarRahoUPIkaro @upichalega pic.twitter.com/mJSv6Q2XW4

The journey of #ZimmedarRahoUPIKaro started early last year with a 360-degree campaign co-created by NPCI and payment ecosystem players – ‘UPI Chalega’— to create a habitual change among customers to adopt UPI and educate users on its safe usage. Rao, who is the protagonist of the campaign, plays an important role in communicating UPI as a easy, safe and instant solution for making payments.

When the Covid-19 pandemic hit India last year, this campaign took a step ahead and urged customers to switch to digital payments to ensure they stay safe at home cultivating the habit of safe digital payments for all their essentials with #IndiaPaySafe campaign.

The #ZimmedarRahoUPIKaro campaign is set to enable people to follow the responsible path of caring and sharing with UPI.

Watch how one can register on UPI here:

The realisation that making contactless UPI payments for both P2P and P2M categories is yet another step towards following Covid protocols has dwelt upon people.

With this campaign, they wish to create a domino effect and ensure that each person who uses UPI also plays a pivotal role in teaching others to use UPI responsibly for their frequent payment needs.

Sebamed comes up with #NoConditionsApply campaign for its haircare portfolio