Unlike last year’s three-month nationwide lockdown, when circulation came to a halt and ad revenues touched an all-time low, newspapers say it is not so bad this year 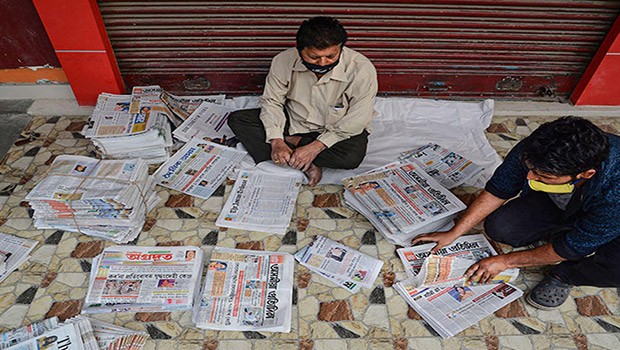 The newspaper industry, which was on the path to recovery from the impact of the Covid-19 pandemic, is now looking at another sluggish year because of the raging second wave and states-wide lockdown.

According to several reports, the newspaper industry had lost almost 40% of its revenue in 2020 because of the pandemic.

The industry was hoping to partially make up for the revenue loss this year but with lockdown-like restrictions across the country, advertising from segments such as auto, real estate, luxury items and consumer technology has been at a standstill for almost a month now.

According to industry leaders, the impact has been milder than last year but all growth predictions have gone for a toss.

A top executive from a leading English newspaper said circulation has not been impacted because of the lockdowns but the ad inventory has seen a decline as compared to Q4 of 2021.

He said in terms of revenue, 2021 isn't as bad as last year but a lack of growth may again push them to go for cost-cutting measures.

In the present year, the industry still hopes for some growth over 2020 despite the second wave as healthcare, financial services, edtech, FMCG and a few other categories continue to use newspapers as a prominent medium. “From a business perspective, the second wave is milder than the first. Last year, the months of April, May, and June were completely wiped out. Compared to that, in April this year, we did reasonably well. Though the last 10 days were bad, we did so well in the first 20 days that it sort of made up. We met our revenue targets in April, largely due to the elections. Though in May we have been hit like everybody else, it’s nothing compared to last year. We would probably manage 60% of the ad revenue of what we had initially thought,” said Suresh Balakrishna, Chief Financial Officer, The Hindu. L Adimoolam, Business and Technical Director, Dinamalar, and President of the Indian Newspaper Society (INS), said the situation is no different from last year but they are better prepared to handle it.

“From the business angle, we are a little prepared now to handle it as it is a repeat of 2020. The situation is no different. We survived the first onslaught but this time every business will be hit again like last time with no exception. We have seen a low and only hope it does not get any lower. All businesses have restructured and we only hope this second wave does not call for further re-adjustments,” he said.

Last year, some states did not allow newspaper distribution as part of the lockdown guidelines. Many housing societies had also banned the entry of newspaper vendors while many people paused subscriptions fearing that the newspaper could transmit the virus. These factors led to a massive decline in circulation last year.

Balakrishna says they have not witnessed any such decline this year.

Dinamalar’s circulation has also not been impacted badly. “There was a time when people thought newspapers may be a potential carrier of the Covid virus. Post-July last year, as these doubts were cleared, subscriptions started picking up to almost normal levels. The second wave has not badly impacted circulation numbers. However, the impact of the first wave continues and we are all trying to reach our normal circulation numbers,” Adimoolam said.

In the case of The Hindu, their major markets lie in the southern states of Tamil Nadu, Kerala and Karnataka. Compared to last year, these states have witnessed a phenomenal rise in cases and they have announced a lockdown. Yet its impact on the business has been minimal. While brands have become cautious of their spends, many categories are still advertising.

“That is why the business has not been wiped out. FMCG, automobiles, office equipment, education companies, and real estate are still advertising. So all that is keeping us going,” said Balakrishna.

Adimoolam pointed out another silver lining in these gloomy times. With work-from-home making a return, the time spent on newspapers has increased as people have more time to consume news. “This again proves that newspapers are consumed for authentic news as fake news is all over social media,” he said.

Confirming the impact on advertising revenues, he said this is a time when all stakeholders must support each other.

“Undoubtedly, advertising revenues have been impacted. We will come out of this tough and unprecedented time only by lending each other our shoulders. Clients, advertising agencies and newspapers should all work together. One should not exploit the other for their own survival. Clients and agencies should understand that it is the newspaper that carries the brand into the homes of the readers who consume different brands,” he said.

The Hindu, like most others in the country, had not anticipated this wave and its impact on the business. “We signed and sealed our annual business plans by February. In terms of revenue, we did extremely well that month and in fact, it was a record month. So the business plan was made in that euphoria. We were very aggressive about our projections for the next year and we made assumptions that the situation would improve by October,” Balakrishna added.

While on the business side the situation is fine, he says the employees’ morale has taken a severe beating.

“The morale has taken a royal beating because employees and their relatives have passed away. Covid has come home for all the publication houses this time. Many of our employees are currently unavailable either because they or their family members are infected. 80% of the Delhi office, 30% of the Mumbai office, and 40% in the Bengaluru office are currently unavailable. It is a very strange dichotomy to what happened last year. While the business was completely washed out, the morale was not so low,” Balakrishna said.

He said last year’s difficult times prepared them to handle the situation better now. “We have learned to live with Covid. We are very comfortable doing virtual client meetings. It has reached a level of extreme efficiency. Our job involves sitting across the client and convincing them. And the chances of convincing them are much higher when you are face to face. But it is creditable that we have mastered that art on virtual platforms. And we are using it to our advantage,” he said.

With states imposing lockdowns and clients becoming unavailable they do not have much work in May. So they have got on board digital experts from across the country and are investing this time in training and upgrading programmes for the staff.

Meanwhile, Adimoolam has pinned his hopes on the vaccines. “We are hopeful that with the vaccination progress, this pandemic will soon be brought under control. Once this happens, we will all learn to live with the virus and adapt ourselves to the new normal and hope for things to revive from the second quarter onward,” he said.