The embattled mediums are getting a revenue boost from large-scale political advertising in Assam, West Bengal, Kerala and Tamil Nadu. The gains are big for the outdoor medium but they remain on the lower side for language newspapers 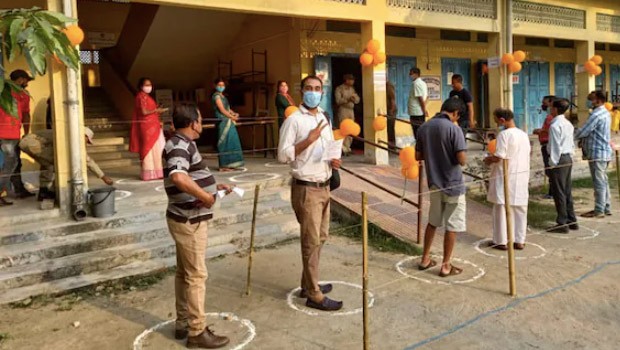 With assembly elections being held in four key states of Assam, West Bengal, Kerala and Tamil Nadu and the union territory of Puducherry this month, outdoor and print mediums are seeing a surge in political advertising.

Both the mediums were heavily affected because of the Covid-19 pandemic. But political advertising now seems to be driving recovery of revenue for the embattled mediums.

All political parties across the states are going big on outdoor with the Bharatiya Janata Party being ahead in Assam and West Bengal. The others are not lagging behind much either. Dipankar Sanyal, CEO, Platinum Communications, said that local media owners gain a lot through these ads as they are high-frequency campaigns. “And it happens across a particular state or constituency. The kind of money that political parties spend on these campaigns, we see some clients spending that amount in a whole year. So the spends are huge. And everybody gains from this—the production guys, the media owners, the fabrication guys. These election campaigns happen over a period of months and in those times, it is a big boost to the outdoor fraternity,” he said. Fabian Trevor Cowan, Country Head, Posterscope India, also agreed that political ads provide a much-needed boost for the OOH industry ‘given that parties are pulling all stops to outshout each other in their respective regions’.

Sanyal said that this year particularly, it has come as a great boost. “All the statistics are down. Compared to 2019-20, there is much more vacant media now. So in this situation during the pandemic, the spending on outdoors is definitely welcome,” he said.

Speaking on the digital shift, Sanyal said, “The digital platform is a very small base. In a political campaign, the key thing is visibility. They need larger-than-life and in-your-face campaigns. So obviously the traditional formats have a much bigger role to play. So digital is minuscule, it's not going to be much.”

Cowan said that from the 2014 Lok Sabha elections, all political parties started adopting digital platforms in addition to print, television, radio and OOH. “These state elections too will follow a similar strategy for sure,” he said.

Cowan believes the spends may increase this year given the fact that all four states are very significant from a political landscape perspective and also that the creatives may be more issue-based than before.

Though outdoor is getting a big boost from political parties, the regional print doesn’t seem to be gaining as much. Though the overall ad inventory has increased from political advertising, most of it is coming from the candidates on an individual city edition basis and parties haven’t taken the carpet bombing approach on print this time. “Political ads form only 0.5% of our total ad revenue. And for us every ad is important, irrespective of whether it is political or not,” said Jayant Mathew, Executive Editor, Malayala Manorama, a Malayalam newspaper. Sudeep Kumar, Cluster Head, Mathrubhumi, another Malayalam newspaper, said that though the political ad revenue is a boost to the pandemic-hit industry, it's not a huge amount.

“The value is not that much when compared to our turnover. Any revenue is a boon for the paper, but if you quantify the political ad revenue, it's not a big amount. The ratio of political versus commercial ads is not comparable. If you compare them, commercial is our mainstay even now,” he said.

He says that political ads form barely one per cent of their annual turnover. While he believes the revenue would be the same this year as well, its percentage may increase by a few points as the overall revenue this year was less.

He said that the print medium is extremely important for the political parties as it is the best medium to reach the hyperlocal voters and compared to the digital medium, it helps them reach every nook and corner of the state.

“While parties are going digital, it is not at the cost of print,” he said.

He said that the parties have now started opting for hyperlocal ads in their editions. “Earlier, parties used to take all Kerala ads. But now each candidate is concentrating on their constituency and is hyperlocalising their ads.”

“It's only buffer revenue for us and not a saviour. It's a very minuscule percentage as our commercial ads are much larger. It's a slight buffer for a particular month, maybe for March and April. Our normal business is all in place and we are doing well. So we don’t have a problem,” he said.

Skandraaj said that this election season, they are seeing more ad revenue when compared to previous years. “They are willing to spend more now. Maybe because this is a challenging election for all the parties,” he added.

Speaking about political ads shifting to digital platforms, he said, “In Tamil Nadu, print makes a huge difference. It gives political parties more mileage and exposure than digital. All the parties make sure they are there in print. But there would be only some parties that have an only digital presence.”

He also said that now all the parties prefer big format advertising and go for full-page ads.