After launching India’s first LED screens on waters in Mumbai, Zen Digital to go pan-India starting from Goa. They are now in the testing phase and have got several brands such as Amul, MG Hector, Skoda, Tata Motors, Volvo, Mercedes, Kotak, HSBC, Amazon Prime, and non-government bodies like ASCI on board 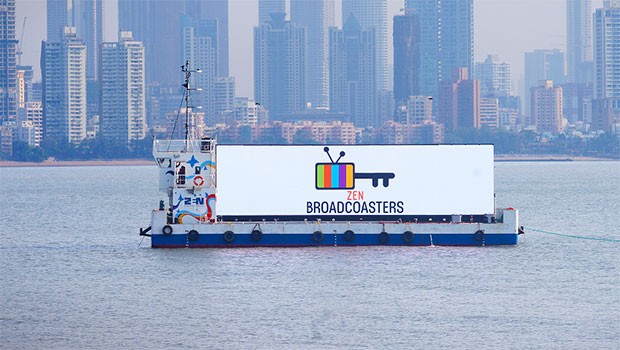 After launching their first ‘Broadcoaster’ at the Bandra Worli Sea Link (BWSL) in Mumbai, Zen Digital Media proposes to go pan-India with their next destination being the beaches of Goa. Before that, they will launch another vessel at Juhu next month. Speaking to BestMediaInfo.com, Varun Ramrakhyani, Head of Marketing, Zen Digital Media, spelled out the future plans for their latest venture of LED screens on water.

On March 15, the first Broadcoaster was anchored at BWSL, visible to the commuters on the 5.6-km sea bridge. But the Juhu one will be mobile and will ply along a five-kilometre distance between the Juhu and Versova beaches.

Since BWSL sees heavy traffic, as a precautionary measure to not distract drivers, they do not play videos and stick to static and light animation. However, at Juhu, they plan to introduce heavy animation, VFX, and full-length videos. “Let's say Disney wants to promote Thor; with VFX they can use lightning and hammer effects rather than just a normal poster saying Thor,” he said.

Ramrakhyani said that the location is one of their USPs as they always choose prominent spots. “There is very high vehicular traffic at BWSL. It is also a very niche audience because only those who can afford to pay the Rs 150 toll take that sea link. Secondly, it is a tourist location. So everybody coming from outside the city makes it a point to visit that location. Similarly, Juhu has a good mix of a massy segment. It is again a tourist location and we have a lot of five-star hotels as well as a lot of celebrity homes.”

The ‘Broadcoasters’ will be seen along the coast only between the months of October and May as they will have to be out of the waters during the monsoon. They are currently in the testing phase and have got several brands such as Amul, MG Hector, Skoda, Tata Motors, Volvo, Mercedes, Kotak, HSBC, Amazon Prime, and non-government bodies such as the Advertising Standards Council of India (ASCI) on board.

“The brands want to see how it plays out on the screen. That is why we came up with a test phase. They give us the creatives to test with the font, the animations, the colours, etc. We'll be giving them the commercials soon. We want to encourage maximum participation and keep the medium very flexible,” he said.

Launched in 2017, Zen Digital Media is an Indian startup started by founders Sanjay Raval and Payal Raval. Broadcoasters is one of their first products to go live. This medium is a capital-intensive project and requires several permissions from different government bodies. The vessel had to be designed according to the specifications mandated by the Indian Register of Shipping and designed to take a heavy load of huge LED screens. These are said to have the largest screens on water at 1100 square feet.

Speaking about its inception, Ramrakhyani said, "We were tinkering with the idea of doing something on the coastal front of India. So we approached the government authorities and they gave us a go-ahead. The policy was passed by the cabinet and then there was a tender process for locations."

Ramrakhyani said they do not want to be compared to OOH and want to create a new category in itself. “If we look at other media mixes, there is nothing like this on water. We are trying very hard to not categorise ourselves as outdoors and to not be compared with it. So we wanted to create a new category in itself, which is why we called ourselves Broadcoasters. We are essentially broadcasters, because we can relay anything that we want onto our space, but we are on the coastline.”

Zen Digital is expecting more competitors in the market in the coming days. However, the new entrants cannot take the same locations already allocated to them. “No business stays a virgin business for a long time. But having said that, it is a very capital-heavy infra project. It takes time to win the government around, gather all permissions, and also build the vessels. And it is very cost-heavy to create an open platform,” he said.

Speaking on measurement, he said, “The traditional industry is very ROI-centric and everything has to be measured. But creativity is very subjective and cannot be measured. Brands that want to test the market with creativity come to us. There are no numbers for creating goodwill. This is all part of brand building and goodwill and nurturing creativity.”

To ensure the novelty of the platform doesn’t wear out, they have carved out a very content-driven solution and made it a creative platform. And with that, they have opened it to a lot of participants like the government, NGOs, brands, artists, illustrators, photographers, and content collaborators from across India. The Brihanmumbai Municipal Corporation (BMC), Mumbai Police and ASCI are already participating.

“We are allowing brands to use our platform as a creative communication tool to build their storylines. We've also reached out to creative artists, asking them to give us their creatives to play on the screen and in return they get recognition. The brands can also cross-collaborate with these artists. With this, everyone has a bigger talent pool to tap into rather than sticking to their in-house people,” he said.

They have an event segment and an entertainment segment for all OTT platforms, Bollywood, Hollywood, and any kind of product launches. “For this, we have tied up with five-star properties along the beach to conduct the events. And we can just dock our vessel right in front of them, so that way we can have audio as well.”

They aim to keep the screens dynamic and current affairs-based so that whenever the audience looks at the screen, they learn something. They will also showcase Indian achievements such as an Olympics victory or an ISRO launch on their screens.

Zen is also planning a ‘Beach and You’ initiative to get people to the Juhu beach. They have tied up with health and fitness companies to air fitness sessions for people to join freely when the screens are not being used for commercial purposes.

“We want people to come out of their homes to the beach. For example, a lot of people come to the beach at 6 am. But there is no point in playing ads at that time. So we will use the screens effectively. It will all be community-building activities because we want people to use the coastline.”