The 29-year-old with a BTech degree describes his love for advertising, and his journey so far in the creative world. He also explains the importance of storytelling in advertising 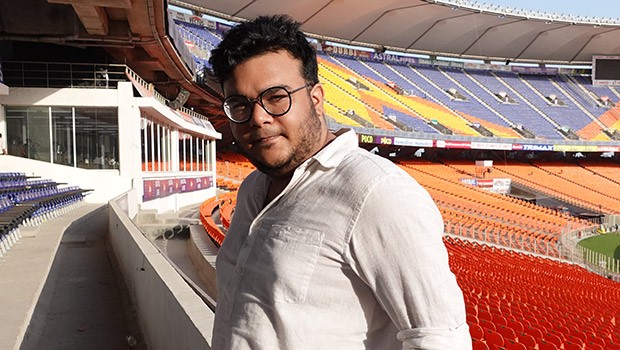 Despite obtaining a BTech degree, Sourodeep Banerjee knew he was not made for engineering. After stumbling upon the two books, ‘Ogilvy on Advertising’ and ‘Positioning: Battle for your mind’, he fell in love with advertising.

Banerjee, who took a risk seven years ago by venturing into uncharted waters, says advertising is where he was meant to be and his journey so far has been extremely fulfilling. His curiosity, ambition and audacity have helped him come this far, he says.

Starting his advertising journey with Utopeia Communications, Banerjee has always tried to juggle new activities and getting newer jobs to learn the basics of advertising. He joined FoxyMoron in 2019.

“I had definitely heard about FoxyMoron and my decision to move here can be attributed to two main reasons. Firstly, I wanted to work on a large variety of brands with far more visibility and bandwidth to experiment with newer ideas. Secondly, they were integrating tech to fuel these big ideas and I wanted to be a part of that journey. My experience at FoxyMoron has truly been enriching. They break quite a few stereotypes that are expected of bigger agencies and truly believe in being creative, open to crazy ideas, providing a fun culture for all, and treating everyone as equals. Even with their recent establishment of the Zoo Media network, I have seen all agencies work homogeneously, which creates a solid creative ecosystem that provides data-backed creative solutions. The best part is that you get to learn from the hungriest minds in the industry!” he said.

“I don’t think there is anything else that I would rather do than advertising. I chanced upon it one summer, and it has been the best decision I have ever taken. But if not advertising, I would have probably been a social activist fighting for world peace,” said Banerjee.

According to him, the most fun campaign he has been a part of was for the title promotion of ‘AK vs AK’ for Netflix India. “The experimental genre of the film demanded that its promotions live up to that very sentiment. We worked on a very interesting insight for this campaign, ‘Everyone likes a good fight, they love a dirty one!’ AK vs AK was unique not only in terms of the execution (very rarely have we seen movie promotions take such a turn that they are loved by all) but also in terms of the thought process and ideation.”

“With our core thought in place, we created a Twitter feud between Anil Kapoor and Anurag Kashyap to promote the film. Next came the billboards, reimagining the OOH landscape for film marketing in India by carefully crafting well-researched insults. These were loved by the media and we created the most noise possible by leveraging social media channels to amplify our engagement,” he added.

Banerjee says while the pandemic has not affected him much personally, the worst part of it was not being able to see the people that you work with every day. “That virtual brainstorms don't hold a candle to physically locking yourself in a room with your team and coming up with ideas over 12 cups of coffee. There is a different sense of achievement and exhilaration to that. Personally, I don’t think it has affected me much as I think I am the same person who I was back in 2020, ambitious, driven, curious, and easy-going,” he added.

Asked about his biggest achievement yet, he recalled a phone conversation with a friend who works in a competition agency. “She told me that she was in a meeting with a client (one of the largest OTT players in India) and they made a reference to a campaign that I had been an integral part of, as a benchmark for excellent work. It was a great feeling and it served to push me to try even harder and be an even better version of myself.”

He says the best part about his job is being able to tell stories. According to him, advertising is a lot of things. “Over the years, we have heard a lot being said about its impact and influence. But what most people do not understand is that at its very core, advertising is the art of telling stories. Stories that inspire the audience, connect with them and draw out an emotion or two perhaps. Some of these stories may sell products or experiences but when it is done right, these stories have the power to change society.”

Asked who he looks up to for inspiration in the industry, he said Spike Jonze is probably the greatest storyteller to have ever lived. His ad for Ikea Lamp still continues to inspire him and it is one of the ad films he watches regularly before tackling any brief. “Most people don’t realise the impact that a powerful copy can generate. For anyone out there who wants to learn the craft and wit of writing a good copy, they should follow Neil French. His ads are nothing short of gospel for those who truly want to pen down creative yet impactful words.”