Adex numbers released by three media agencies earlier this month have projected very little growth for print in 2021. Print publications, however, question the numbers and the methodologies adopted by the agencies 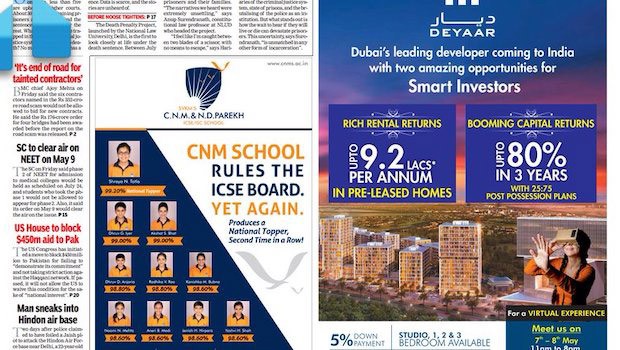 While print advertising is coming back to normal with circulation nearing pre-Covid levels, three reports launched earlier this month have calculated the medium’s adex in a manner that suggests print advertising will perhaps never return to 2019 numbers.

For example, the first report launched by Dentsu said print will grow at a rate of 3% every year and reach Rs 13,970 crore in 2021 and Rs 14,800 crore in 2022. Going by this rate, it seems print will perhaps not return to its pre-Covid numbers.

However, print publishers feel the reports underplay the medium’s potential and does not reflect true projections. BestMediaInfo.com spoke to some publications to understand their reservations with these reports.

“The regional newspapers are very strong. If we look at Kerala, unlike the national markets, the circulation was not that affected because of Covid. These agencies have their own strategies to bring down the print rates. It is all a mind game to undermine the print industry. With this, they can say print isn’t growing, so give us better rates. That’s a mere ploy by some of the agencies and that's not going to work. But I think Madison has come up with realistic figures,” said MV Shreyams Kumar, MD, Mathrubhumi.

A leading national daily’s CEO questioned the credibility of such reports. “Research reports usually declare the methodologies for credibility, which is not the case with these reports,” the chief executive said.

Kumar pegs the growth projection for 2021 at more than 45% of 2020’s figures as Covid brought in poor ad spends last year. He feels that print cannot be ignored by advertisers.

“If you look at our market in Kerala, the reach of print is as good as television, and that too all the televisions put together in English, Tamil and Kannada. As per the last IRS figures, the reach of newspapers is at 91%. Print cannot be ignored. This is just a ploy and it will not work,” he said.

While agreeing that the situation varies from state to state as print gains up to 50% of the adex in Kerala, Varghese Chandy from Malayala Manorama also suggests that the industry should look at the 2019-20 figures and not the 2020-21 figures.

Chandy says that print provides brands a much wider reach than television and digital. “While a lot of money is being spent on television and digital, the clients will have to see whether that is reaping them benefits. Even during the pandemic, we found that a lot of clients, who hitherto were not advertising in print, started advertising in a big way. Obviously that's because print is delivering. They are advertising because they see that there is an opportunity,” he said.

A senior executive at a large national publisher told BestMediaInfo.com on the condition of anonymity that it is a deliberate attempt to divert print revenue to other mediums. “If these numbers are meant for the publishers, why weren’t they made a party to the preparation of the report? Were they contacted for ad revenue figures or trends?” he asked.

Suresh Balakrishna, Chief Revenue Officer, The Hindu, also is of the opinion that these reports have projected lower figures for print.

“I think print will do much better. In our experience, print has bounced back significantly already in the last four months. More and more advertisers are reposing their faith and coming back to print. So I think print will do better than what they have projected,” he said.

A senior media buyer had told BestMediaInfo.com last week that these major agencies do not do much of print buying and are more focussed on television and digital. “Smaller agencies tend to be more into the print medium,” he told this publication.

However, Balakrishna doesn’t think that could have impacted the reports. In his opinion, these agencies have not factored in the government ads.

“They do a reasonably good job at measurement. They don't realise the kind of support that we get from government advertising. They don’t consider it,” he said.

However, he doesn’t believe that brands decide their advertising medium looking at these figures. “They make decisions based on their experience, their dealers' feedback, their regional office feedback and what is the brand’s task at hand. These figures do not decide that,” he added.

Abhishek Karnani, Director of Free Press Journal, also feels that the numbers are muted. He feels this could be because the reports do not reflect the data from the midsize and smaller agencies.

“Most of the agencies that service print are local and probably that data is not reflected in these reports. For these larger agencies, their flavour has been digital. That could be the reason why print figures are lower,” said Karnani.

Though the perception towards digital has changed during the pandemic, he firmly believes that brands are coming back to advertise in print and the situation would be far better than what the figures are suggesting.

“The government is looking at privatisation of quite a few PSUs and you look at the number of new IPOs that are coming; they'll all be looking at print. It does not go. Probably there would be a spill on TV and outdoors. But the majority would obviously come to print,” he said.