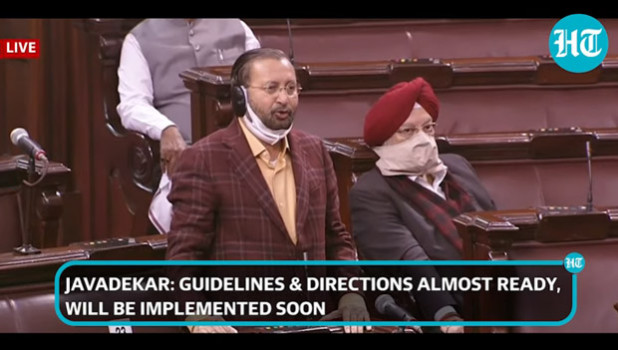 Guidelines and directions for over-the-top (OTT) platforms are ready and would be implemented very soon, Union Information and Broadcasting Minister Prakash Javadekar said in the Rajya Sabha today.

The matter was raised by Rajya Sabha member from Jharkhand, Mahesh Poddar. “Although consumption of OTT platforms has increased due to lockdown and theatres being shut down, there is a worry about content targeting Indian values. The language used on these platforms reflects sexual discrimination in the form of verbal abuses. The Government should not delay in regulating these platforms,” said Poddar.

The Union Minister in his reply said that the regulatory guidelines were almost ready. “The issues raised by Poddar are important; every day we get many complaints and suggestions about regulating these platforms. The guidelines and directions are almost ready and will be implemented very soon,” Javadekar said.

The buzz about regulating OTT platforms has been on for quite some time now. While viewers are waiting for the Government to come out with their regulatory norms, the Internet and Mobile Association of India (IAMAI) is also coming out with its own set of guidelines.

Earlier in 2020, IAMAI had come up with a self-regulatory framework signed by 16 OTT players but it was rejected by the MIB. The Ministry had advised looking at the structures of NBSA (News Broadcasting Standards Authority) and BCCC (Broadcasting Content Complaints Council) as guiding principles for developing a credible self-regulatory model for OTT platforms.

The Ministry had suggested a two-tier structure for the regime. “In the self-regulatory mechanism which has been constituted, it is observed that there is no classification of prohibited content, the second tier (advisory panel) is constituted by OCCP (online curated content providers) itself (as against an independent organisation like DCCP or the Digital Curated Content Complaints Council proposed earlier)."

The proposed self-regulatory mechanism lacks independent third-party monitoring, does not have a well-defined code of ethics, does not clearly enunciate prohibited content, and at the second and third-tier level there is an issue of conflict of interest, the MIB had said.

Recently, there was uproar on social media against Amazon Prime Original series ‘Tandav’, which has been accused of hurting religious sentiments. FIRs against the actors, writers and makers of the web series were lodged in Uttar Pradesh.