The #DNAFightsRape initiative calls upon leaders to set a target year to free the nation of the menace. Voices from civil societies are demanding a step up in the use of DNA evidence in rape investigation 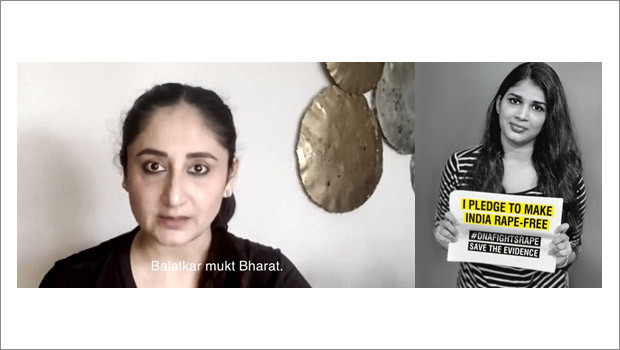 Amid a surge in crime post lockdown, incidents of sexual offence and rape continue to be topmost concern for the safety of women and children – prompting prominent voices from civil societies to demand the use of DNA evidence in rape investigation.

Marking the Day of International Criminal Justice, July 17, also known as the International Justice Day, the #DNAFightsRape initiative carries the sentiment of people pledging to make India rape-free. The initiative calls upon the country leaders to set a target to free the nation of the heinous crime.

In a compelling video, writer, anchor and actor Gitikka Ganju Dhar shares her message, “Hurrah to the Prime Minister's vision of building a 5 trillion-dollar economy by 2024. Alongside, the Quality of Life Index for women in India must also go up. We must set a target for ending the barbaric menace of rape by 2030 and transform India into a rape-free nation, बलात्कार मुक्त भारत. I believe this will happen if and when the number of convictions equals the number of rapes, and speedy and just convictions can only be achieved by using DNA as clinching evidence.”

The most conclusive evidence is the rapist’s DNA, but awareness of DNA forensics is very low in India and its collection a massive problem. In India, a rape victim is often shamed and asked to cleanse herself by her family and society. She is washed and her clothes are cleaned or burnt, leading to loss of crucial DNA evidence even before the case is reported. #DNAFightsRape reinforces the message, ‘Do Not Wash, Do Not Clean, Save The Evidence’. To get justice, we need DNA and for that we need to save bodily evidence in every sexual offence and rape investigation.

Dr Pinky Anand, Sr Advocate said, “The initiative #DNAFightsRape – Save the Evidence started two years ago and has since then come a long way and gained tremendous momentum. I am happy that I could play a role in this drive trying to create awareness among the populace and masses on the importance of DNA evidence, especially in cases of sexual assault and rape. Today, DNA profiling has become one of the most important evidence for detection of crimes like rape and murder, simplifying and easing not just the process of investigations, but often forming clinching evidence in cases where conviction would otherwise have been difficult. Many courts in India are now able to quickly deliver concrete and effective judgments in cases of sexual offences, especially rape because of the veracity and the absolute nature of DNA evidence.”

DNA remains the world’s best crime fighting technology as public figures and subject matter experts from legal, law enforcement, forensics, medical, and public policy fields validate the merit of scientific evidence over ocular evidence in court. The Nirbhaya case is a landmark case as it hugely qualifies the success of DNA evidence. It was effectively used to convict all accused in this case. The law was duly upheld, and justice delivered.

More and more courts today are relying on DNA evidence to convict the offender in cases of sexual offence and rape of minors. Law enforcement and medical forensic experts too are realising the need to step up protocols related to DNA collect and test in rape investigations.

“In the last six months, the judiciary has treated forensic DNA results as conclusive evidence. The process is today becoming successful only due to proper and timely collection of biological evidence by the police and medical examiners from the crime scene and the victim’s body following an incident. Over the last two years, owing to the increased awareness of the importance and the impact of DNA evidence, the testing of DNA in criminal incidents has doubled. We must take care of two things, preserve the evidence in a rape case and second, demand for DNA testing. And if we can do this, we will be able to make this city and this country, a safe place for our women and children,” Dr Anand added.

However, despite growth in the number of profiles being tested, the absolute volume remains low, especially in crimes against women and children. Rising crime, declining conviction rates and an unprecedented backlog of cases in courts clearly establishes huge unmet potential for DNA casework in India. Official statistics show a dramatic increase in the number of crimes against women, which have shot up from 24,923 in 2012 to 33,356 in 2018 – a jump of 34%. As per NCRB data, one woman is raped every 15 minutes in India, whereas only one in four reported rape cases result in conviction.

Tim Schellberg, Founder and President, Gordon Thomas Honeywell—GA, said, “I am proud to endorse the #DNAFightsRape on International Justice Day. This campaign will bring much needed awareness of the power of DNA in delivering justice to rape survivors. This awareness will create the expectation in India that when a rape occurs, DNA will be collected and tested quickly. In the United States and many other countries that were early to mainstream DNA forensics, rape survivors and their families have a general understanding of DNA evidence and they know its value to a criminal investigation. As a result, the culture in these countries is not to clean or wash evidence and pursue medical examination at the earliest. India too would see greater utilisation of DNA in sexual assaults if people here made it a top priority. This would not only bring sexual offenders to justice but act as a strong deterrent to the act of rape.”

Stating the sense of urgency and call to action, Arneeta Vasudeva, Senior Vice-President, Ogilvy, added, “Rape is a malice that has permeated into this nation’s fabric and is spreading at an alarming rate. With only one in four rape cases leading to conviction, the future looks grim unless we do something about it. So let’s all on this Day of International Criminal Justice take a pledge to do our part in making India a rape-free country, and a safer community for our women and children.”

#DNAFightsRape – Save the Evidence, a citizen awareness drive was launched on November 25, 2019, the International Day for the Elimination of Violence Against Women, in partnership with the Delhi Police, AIIMS, UN Women India, Red FM and MARD, with the aim to educate people on the role they have in saving crucial DNA evidence and expediting India’s criminal justice system in sexual offence and rape cases. The movement further gained momentum with several partners like Gujarat Forensic Sciences University (GFSU) and Girl Up (UN Foundation) endorsing it this year.

To join the movement, use #DNAFightsRape #WherestheDNA and post a picture along with a message to spread the word, Make India Rape Free.