Produced by Fountainhead MKTG, the grand finale concert and fundraiser to Facebook Social for Good Live-athon with 85+ top Indian and global stars to raise funds for GiveIndia Covid-19 relief fund 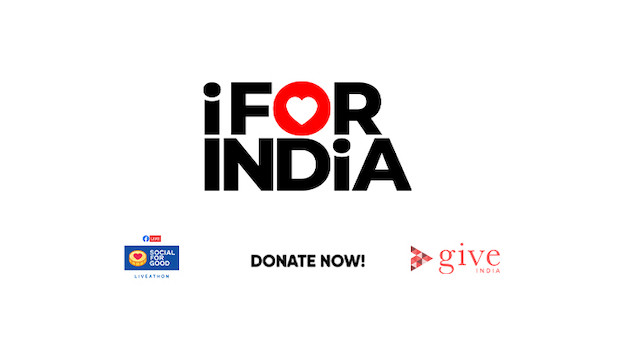 Facebook has collaborated with some of the biggest names in Indian entertainment to put together a home-to-home fundraiser concert, I For India. 100% proceeds from the fundraiser concert will go to the India COVID Response Fund managed by GiveIndia, to support on-ground relief efforts. GiveIndia is India’s largest giving platform with reach across 23 states. It is associated with over 100 NGOs, working on-ground to support the required interventions with prevention, healthcare infrastructure, livelihood support and essentials for people in need.

The vision for the concert by leaders from the entertainment industry is three-pronged: to entertain those locked down in their homes. To pay tribute to those who are working on the frontlines. And to raise funds for those who have no work and no home and do not know where their next meal is coming from.

The four-hour-long concert will be live globally on Facebook (https://www.facebook.com/facebookappIndia/) on Sunday, May 3, 2020, at 7.30 pm IST and will feature performances and personal messages from 85+ Indian and global stars.

I for India’s Fundraiser is already active on Facebook and people can donate via https://fb.me/IforIndiaFundraiser. People will also be able to make a donation via the donate button next to the video while watching the concert.

Ajit Mohan, Vice President and Managing Director, Facebook India, said, “As a company, Facebook is committed to being an ally for India as the country fights the coronavirus outbreak. Our efforts so far have been focused towards providing access to accurate health information and supporting communities around the country. We recently launched Facebook Fundraisers, that allow people to leverage the full scale and power of the platform, and their passion, to direct resources to initiatives that can protect and save lives. We’re grateful to the creators, celebrities and publishers participating in ‘Social For Good’ Live-athon to drive the fundraisers. The ‘I for India’ concert is the grand finale of these efforts, featuring well-known artists and influencers.”

Atul Satija, CEO, GiveIndia, said, "The I For India fundraiser concert, backed by a fabulous line up of stars, really feels like a nation coming together - though we are isolated, we are united in our efforts to win this battle against COVID-19. We have already received tremendous support for our missions to provide humanitarian aid to those most affected by this crisis, particularly migrant workers and daily wagers. But with the concert going live on the world's largest social media platform, it will help reach the millions of people who want to contribute to this war-like effort. We are extremely grateful to the organisers for putting their trust in us as the donations partner."

The event is produced by Fountainhead MKTG. V G Jairam, Co-Founder, Fountainhead MKTG, said “It is a matter of great pride for us at Fountainhead MKTG to work with the world’s largest film industry, the world’s largest social network and India’s biggest gving platform to pioneer an entertainment-with-purpose format that is India’s biggest home-to-home concert featuring over 85 large global celebrities across genres. This show has been produced in a record two weeks. We hope everyone enjoys the show and donates wholeheartedly. We are all, truly, in this together.”

Tags: Facebook I For India
Advertisment
More from this section