A spike in advertising revenue during the festive season has given pandemic-hit, fund-starved newspapers a much-needed ray of hope 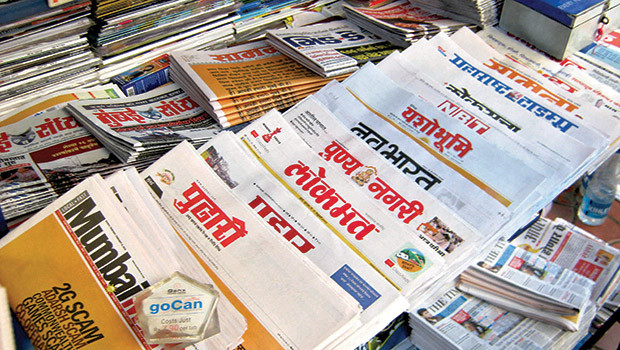 The non-English print media is optimistic of a full recovery in the backdrop of the festive season triggering a much-needed spike in advertising revenue after months of downturn due to the coronavirus pandemic. Though the economy is yet to fully pick up pace as compared to pre-Covid times, the ad revenue of regional newspapers is steadily beginning to improve. “We have returned to 80% circulation of pre-Covid levels and even the ad revenue, which had dropped by 40%, has come down to 30%. At the beginning of the lockdown, for two months, it was zero, as we were not allowed to print. We believe that circulation and ad revenue will go back to previous levels before June next year,” Prataprao Pawar, Chairman, Sakal Papers Pvt. Ltd, said.

Dainik Bhaskar, a Hindi newspaper with the highest circulation in India, is experiencing a similar recovery, and its management believes that with the economy starting to get back on its feet, circulation should return to earlier levels.

“In the Hindi and Indian language markets, depending on the state, 85-90% circulation has been restored. The remainder, which is mostly cash sales, is expected to be back with the full restoration of railway and bus services, opening of hospitality and offices, etc.,” Kaacon Sethi, Chief Corporate Marketing Officer, Dainik Bhaskar Group, said.

Media experts believe the recovery will be much faster for regional newspapers compared to the English print media.

“I think regional print has the potential to recover faster than English print, since in any case, the potential for print and its sustenance, in the past few years, has been in regional upcountry markets. The sustenance of circulation and readership is relatively easier in regional markets, because the habitual dependence on digital sources for news is relatively lower. Also due to the few months of non-availability of physical newspapers, English audiences in metros have gotten sort of used to sourcing news digitally. So the reading habits on print media have been replaced by digital sources for a significant proportion of the audience, I would imagine – especially as one moves to the younger set. And now, it is likely to be quite a challenge to bring them back. But again, I would imagine, that in regional print, this phenomenon is not that pronounced,” Sundeep Nagpal, Founder Director, Stratagem Media, said.

The newspapers have seen their ad revenues improve with the phased unlocking. “Since the tier 2/3/4 markets re-opened from July, we have seen an upward thrust in print month-on-month, with each succeeding month better than the previous one. Retail advertising has almost normalised while corporate advertising is expected to reach normal levels with the complete opening of the metro markets,” Sethi said.

Marathi publication Sakal has seen a similar trend but Pawar believes a full recovery will happen only when the economy is fully back on its feet. “Once the economy starts recovering, ad revenue will flow. In the meantime, we have enough patience to wait and we have the holding capacity. During this time, we are removing all inefficiencies and cutting costs,” he said.

Deepak Netram, Marketing Consultant, Dreamforce Associates, said the impact of the lockdown was varied in different markets. "Most of the strong language markets in the south seemed to have managed slightly better business compared to other markets. There may have been an obvious temporary effect in some markets where copies were unavailable due to the lockdown. But that would have been addressed gradually," Deepak Netram said.

As hyper-local brands still prefer print for advertising, he believes they would bring in ad revenue. “In this pandemic, a lot of local businesses played key roles in ensuring that things continue and bring normalcy in some way, and those businesses continued to grow. So they would definitely come back to advertise,” he said.

The festive season came as a much-needed shot in the arm. The spike in advertising revenue helped newspapers recover much of their losses.

“The festive season provided a thrust. Categories such as auto, FMCG, real estate, consumer durables, BFSI, jewellery have been highly active in the festive months. The education category has picked up in terms of advertising due to the shift of the education season,” said Sethi.

While the festive season always brings cheer to ad revenue, it was quite different in this pandemic-struck year. “We did see a spike in ad revenue during the festive season and it has not yet dipped. But we had to compromise on the rates and the quantity. Earlier if brands advertised for five days in a month, now it was just two days. But we managed to cover our losses and I’m sure we will be able to rake in the remaining revenue by the next fiscal,” Pawar said.

The average number of pages in a daily can be a barometer of the health of print.

Nagpal cautioned, “Going by the number of pages of the main issue, it seems evident that the situation has not really improved from what it was pre-Covid. Also, the city supplements have become a part of the main issue,”

Even Sakal has not increased the number of pages yet, seeing a decline of 20%. “We are economising because there are no ads. We will give content based on what readers should get. We don't give extra pages because that doesn't make any sense. It adds to losses,” Pawar said.

They even expect the circulation to further increase. “We expect circulation to continue to grow 3-4% organically per year. As literacy goes up in the population strata, reading grows as it is considered a good habit. We continue to focus on boosting circulation across our markets through good ground connection with our readers and the vendor-partner ecosystem,” Sethi said.

Another worrying trend for print media is that the pandemic increased readers’ dependence on digital platforms. “Advertising revenue on digital news platforms is only a fraction of what they have been on the print medium. So, clearly print has to adopt a multi-pronged strategy to revive its sagging fortunes, be it in terms or retention of readers or advertisers, by way of incentivisation or innovation, which can make the product compellingly distinct for habitual consumption by audiences, because the convenience and speed of digital is obviously no comparison,” said Nagpal.

Pawar compared newspaper reading habits to cigarette smoking and said, “Circulation fortunately is a habitual product. It is like a cigarette. You have to have a physical copy. Luckily for us at least 70% of our circulation is around 30-35 years old. So we aren't worried, we will get back our circulation,” he said.

Newspapers are banking on their credibility to help them on their way to recovery. “As per the July 2020 EY survey and the September 2020 Ormax Media report, newspapers were found to be the ‘most credible’ media vehicle for news. This is one of the main reasons why advertisers flocked to print in a big way in the pandemic and right up to the festive season and beyond,” Sethi said.

Pawar aired a similar sentiment, “I feel the print media has more credibility than television and that helps us. As the economy starts improving, advertisers will have to promote their products and they will have to have reach. We can provide them that.”