What does a regulation for online news mean for ad spends in the space?

As experts expect aspects like fake news and toxicity to reduce with regulation, BestMediaInfo.com asks them if this will further affect the ad spends on digital news

Many experts feel more clarity from the Government about the subject is needed to navigate the situation. According to Sundeep Nagpal, Founder, and Director, Stratagem Media, the ad spends wonŌĆÖt increase as all ads in the digital space are placed through algorithms, and advertisers donŌĆÖt rely on the metrics such as toxicity.

ŌĆ£No, it wonŌĆÖt affect ad spends because the number of eyeballs/reach is generally considered far more important than the quality of content, because after all, quality is a highly subjective matter ŌĆō in fact, even on regulated media like Print and TV, fake / paid news are well disguised, and in any case hardly any advertisers/ brands care to take serious note of this, or use it as a significant enough factor for media selection. Even if the level of toxicity / fake news on digital news platforms was to be measured, the majority of advertisers are unlikely to utilize such metrics,ŌĆØ he said.┬Ā

ŌĆ£LetŌĆÖs not forget at the end of the day, marketers need eyeballs. So, IŌĆÖm not saying the quality of the content on the channel is not relevant, IŌĆÖm saying it is very difficult to find out what is toxic/fake and what is not toxic/ not fake, online,ŌĆØ he explained. 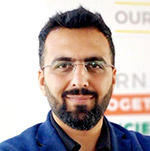 Ritesh Singh, Co-founder and Managing Director, #ARM Worldwide, said the number of people consuming news on digital media would only increase in the future, and hence the ad spends cannot go down.

ŌĆ£I doubt that spending will get affected, we are in a growing phase & are a growth market; internet penetration is growing, more people will come online that means more inventory to sell therefore I donŌĆÖt see advertising dollars going down. There might be change in the way OTT content production happens & new potals operate, brands need eyeballs, there is not going to be more & many of them.ŌĆØ he said.

How will regulation affect online news delivery and consumption?

According to Singh, while the regulation of OTT platforms is centered around censorship, that is not the case when it comes to news portals and publications. He said except for fake news, nothing else can be controlled. ŌĆ£I donŌĆÖt think there is anything else that can be controlled because news is news and I have a perspective about it and I have all the right to convey my perspective. This again, does not restrict content creation. It may change the way these portals create content,ŌĆØ he said.Meanwhile, with online penetration increasing and people searching for credible news, will we also see subscription-based news portals to grow?According to Singh, with such regulations, people will be forced to give quality instead of quantity. ŌĆ£We are definitely looking for quality content as there is enough content available, and it will push the current news portals to push quality content. Will, it put pressure on subscription-based models? Yes, there is a possibility. People who are paying for subscriptions are the evolved audience. New to internet audience is not as evolved, so there are two different worlds we are operating in, and for now, both will grow. We must stay hopeful there is enough for everybody and these regulations might get some disruptions, which doesn't mean regulations are stopping us from growth,ŌĆØ he said.

Nagpal said the MIB decision to regulate is not specifically for news channels, it is more for OTT platforms which could be subjected to some censorship. ŌĆ£I also donŌĆÖt know if MIB will actually censor it, they might just give some guidelines. I don't think they introduce a censor certificate like there is for films. We are talking about all this too early.ŌĆØ

ŌĆ£We live in an era where paid news is masquerading as genuine news, and so does the brand. Brands use content marketing to enhance their credibility. So, the real question to ask, would be - is that also going to be subject to regulation? Brands have found a way to circumvent regulation even on traditional media. After all, this is driven by commercial considerations,ŌĆØ added Nagpal.