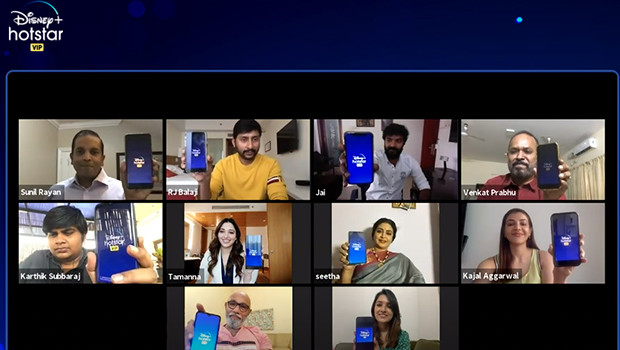 It is also set to launch exclusive Hotstar Specials shows like Live Telecast directed by Venkat Prabhu and starring Kajal Aggarwal; My Perfect Husband starring veteran actors Sathyaraj and Seetha, Triples produced by Karthik Subbaraj and starring Jai Sampath and Vani Bhojan and November Story starring Tamannaah Bhatia. The release dates of these shows are yet to be announced.

Speaking at the launch, Sunil Rayan, President & Head, Disney+ Hotstar, said, “We have always been at the forefront of reinventing and reimagining content in India. As we lay the foundation of presenting authentic stories that appeal to Tamil audiences, we are very excited to partner with some of the most prolific minds in the industry. As we announce the launch of new movies-before-theatre and Hotstar Specials shows, we are adding to our existing promise of providing great Tamil entertainment across live Sports, before TV access to STAR Vijay shows and much more - giving our audiences a wide array of content to choose from”

Ryan further said they already have a lot of content for the Tamil market including Hollywood movies dubbed in Tamil, Bigg Boss Tamil and access to Star Vijay shows. He said the aim is to make content interactive and focus on authentic storytelling by launching the ‘Hotstar Specials’ segment which is dubbed in seven different languages.

“This gives access to as many people as possible and connects India. Our aim is to give viewers access to entertainment in a seamless way. Being committed to the Tamil industry is also a part of our aim. We understand Kollywood is a big part of popular culture for Tamilians. I don’t think anyone loves Superstars and movies like in Tamil Nadu. That’s why we are very committed to giving access to fans to connect with the stars and bring something new to the table,” he added.

When asked about the platform’s further plans for Tamil content, Rayan said they plan to release a number of shows in the upcoming months as well which are at different levels of production currently.